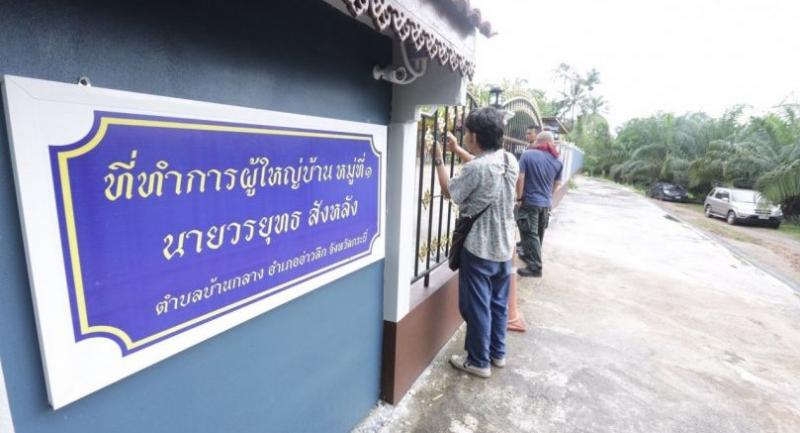 POLICE ARE grilling the suspected mastermind of the massacre of a village headman and his family in Krabi, a police source said yesterday, but no official statement has been forthcoming.

National police chief Pol General Chaktip Chaijinda, who is now in Krabi, yesterday evening refused to confirm whether any arrest has been made. “I will call a press conference later,” he said.

The gangland-style executions of Worayuth Sunglung, a village headman in Krabi’s Ao Luk district, and seven of his family at their home have shocked the nation.

Only three miraculously survived the attack on Monday night with injuries, while the only family member unscathed was Worayuth’s three-month-old baby.

The current investigation suggests that a stone-mill conflict may have led to the crime.

Worayuth reportedly received a huge sum of money from the developers but failed to win locals’ support for the project.

Based on the testimonies of |survivors, the men broke into the house but did not immediately open fire. The bloody attack came after their negotiations with Worayuth failed.

On condition of anonymity, a crime suppression police said records showed Worayuth called his close friend, who is a stone-mill partner, at 9.30pm on Monday |and talked nearly 10 minutes.

However, news reports have mentioned that Chetdanai Thinphang-nga, an executive of a mill and Worayuth’s childhood friend, has been summoned for questioning.

Police yesterday searched the homes of Chetdanai and his uncle, Wipoj Thinphang-nga, a former president of the Ao Luk Tao Tambon Administration Organisation.

A team assigned to review surveillance recordings has found that the vehicles used by the gang had headed towards the Southern Seaboard.

Police would reportedly search a location in Nakhon Si Thammarat province soon because the attackers were believed to have gone into hiding there.

An insider said the killers must have been a gang of debt collectors used to aggressive tactics.

“This gang has recruited rogue ex-soldiers. Those guys were armed,” he added.

A source at the Central Police Forensic Science Division said all the bullets that hit victims in the massacre came from the same gun.

“And that gun very likely belongs to Worayuth,” the source said.

Four food boxes and bottles of water left at the crime scene were now being tested for DNA of |the assailants, the police source added.