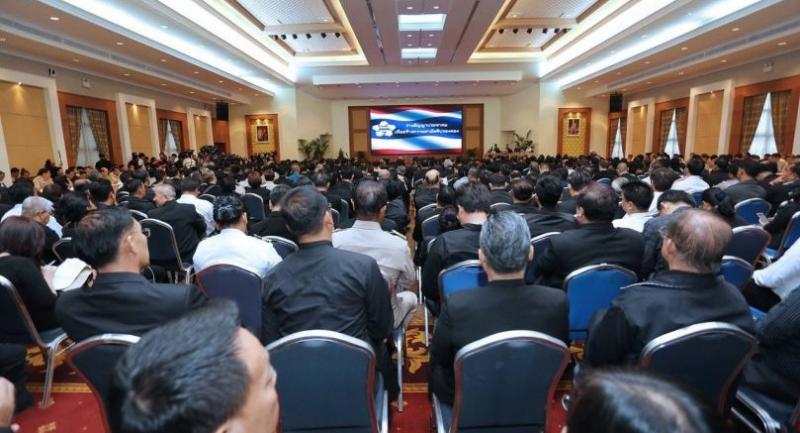 SEVERAL KEY political factions have shown support for, or given way to, the junta-initiated reconciliation effort that came in the form of a national harmony pact revealed last week. But does this non-hostile position mean that reconciliation will be achieved? Critics remain sceptical that this will be the case.

The final public hearings to introduce the draft of the so-called social contract, and seek opinions on it, were held at four regional military barracks around the country from Monday to Thursday last week. Hundreds of people joined in, but the significance of that remains questionable.

First, seats were reserved mostly for those enlisted or invited. Most participants were civil servants called up by Interior agencies. Although NGO workers and political camps had been invited, it is unclear how many actually showed up at the forums.

Despite it being a top national agenda item, only one well-known figure, red-shirt leader Jatuporn Prompan, attended the seminar on Monday at the First Army Area command in Bangkok.

Of the two-hour long presentation by the military, less than 30 minutes were spent on the introduction of the draft social contract – the very highly anticipated end results of the reconciliation attempts that have been ongoing for the past six months. The rest of the time involved officers emphasising the military’s dedication to recreating national harmony and the inclusive, non-dictatorial approach they had adopted in the scheme.

The question-and-answer session after the presentation was broadly welcomed, as some dozen active citizens took to the stage and expressed their thoughts on every issue except those relevant to the topic of reconciliation. Each and every time a person finished making a point, the operating officers had to repeat and remind speakers to stay focused on national harmony before they finally gave in and called it off.

Despite the awkwardness, Jatuporn welcomed the harmony pact, showing his support and promising that the red shirts would not stand in the way.

The political-turned-charity group People’s Democratic Reform Foundation and the Democrat Party, too, gave way to the scheme and said they would provide full co-operation.

But the previously ruling Pheu Thai Party made an official announcement against the contract plan, saying it was problematic and would not be effective.

Political critic Sukhum Nualsakul pointed out that although key political groups said they would cooperate, this did not guarantee the scheme’s success.

Success would depend more on the draft’s content and its practice than what people said about it. If the contract could not result in changes, it would not mean anything, the critic said.

“Plus, I’m not sure about the stances of the political groups. I think it is understandable that they come in support of the contract. Opposing it will only make them look bad,” Sukhum remarked.

Ekachai Srivilas, director of Peace and Governance at the King Prajadhipok’s Institute, too, said that the contract was “just a piece of paper”. There was so much left to do if harmony was really to be achieved, he said.

The scholar, who also sits on the junta-backed reconciliation committee, admitted that the contract remained the main goal of the whole harmonisation attempt. The committee currently had no further plan to put anything into practice to achieve concrete results, he said.

“They will have final meetings in the upcoming weeks. And I’ll see what comes next, if anything,” Ekachai said.

Another scholar, Chamnan Chanruang, thought the social contract was joke, saying the effort did not work from the beginning, and it was never going to.

“It will do nothing to create harmony. How are you supposed to unite people using a contract?” he asked.

Chamnan said the scheme was just another ritual. He cited its process, saying it had been selective and its clear purpose was to serve the 20-year national strategy. He referred to the two last points in the pact that asked all Thai people to support reform and the national strategy.

Reconciliation in other countries, the scholar pointed out, had been achieved rather through “transitional justice” that proposed, for instance, finding the truth and compensating those who had been affected by conflict. These aspects were nowhere to be found in the junta’s reconciliation scheme.

“So, I suggest that the junta learn about this transitional justice which has worked in many countries and try to apply it with our country,” Chamnan said.

Likewise, Chaturon Chaisang, a key Pheu Thai Party politician, said the NCPO had not been sincere in bringing about reconciliation, and had only used the scheme to show it had fulfilled the job it said it would do when seizing power three years ago.

The whole process, he told The Sunday Nation, was apparently another propaganda effort to show that it has attempted to create national harmony. But, in reality, it was a matter of setting up questions that they answer themselves, while ignoring the real problems and their causes.

Chaturon said the points addressed in the pact were good, but they were irrelevant to reconciliation.

“It is like to telling people to exercise or eat healthy. It is nice but irrelevant,” he said. “This social contract will be useless.”

To achieve harmony, Chaturon suggested the NCPO open up a stage for all sides to talk equally, and address the problems and the causes.

Most importantly, the NCPO must accept that it was part of the conflict, too, the veteran politician said.