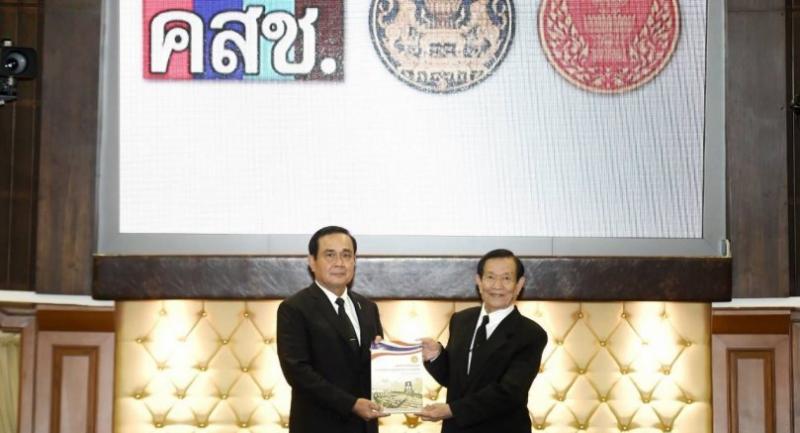 CONTROVERSIAL bills on the long-term national strategy and national reform – which came into effect when they were published in the Royal Gazette yesterday – resulted in one prime body of the so-called “five rivers of power”, the National Reform Steering Assembly (NRSA), leaving office following the promulgation of the laws.

That means a new national strategy committee, headed by Prime Minister Prayut Chan-o-cha, will soon be set up to oversee the country’s 20-year strategy.

The 35-member committee will also consist of top parliamentary officials, currently appointed by the junta, ministers, and commerce and industry chairmen.

The committee is obligated to set up panels to work on various strategies for 30 days. Afterwards, they will have four months to complete the strategies before going to the legal deliberation process for final enactment.

Passed in June, the two laws have drawn mixed public reactions. While some commentators have said a legally binding instrument is essential to guide Thailand, others are concerned that it will not only burden future governments but also ensure that the military-installed regime would maintain power in the future.

The enforcement of the National Reform Bill also constitutionally dissolved the NRSA, appointed by the junta in October 2015 with the task to make so-called reform proposals to government bodies.

The NRSA held its final meeting last Tuesday before officially forwarding reform tasks to Prayut yesterday. NRSA President Captain Tinnaphan Nakata said that 188 reform issues on 37 agendas had been forwarded to Prayut. In the past 10 months, 27 of the 188 issues have been “realised”, Tinnaphan said.

From 27 “urgent agendas” on the NRSA’s past work, 12 would be made into bills or bill drafts, six would come in the form of absolute junta orders, five would be included in a new national economic and social development plan, two would be announcements in the Royal Gazette, and one each would become a decree and 15-year strategy for the Education Ministry, Tinnaphan said.

The reforms span 11 facets, covering organic law drafts on politicians and the Election Commission, new measures on computer crimes, road and community management, the establishment of a corruption court, agriculture management and the digital economy.

Prayut is supposed to move reforms forward as head of the super-committee on national strategy, reform and reconciliation.

Prayut said the reforms would be driven to improve equality issues and strengthen legal enforcement.

“Almost none of the previous governments managed to maintain a four-year term,” Prayut said during his nearly two-hour speech. “So the problem-solving has been on and off, not sustainable.”

He also reiterated that the long-term strategy was meant to set up guidelines for national development, not designed to control future governments.

Only a few days after the NRSA’s last meeting last week, the watchdog iLaw slammed the NRSA for not creating tangible outcomes despite being allocated more than Bt1 billion over the past 22 months.

The majority of the NRSA’s proposals are hazy concepts, iLaw said, coming up with no academic or research endorsements.

They said some proposals could even take the country’s development backwards, including their proposal on media regulation that would allow authorities to interfere in media affairs.