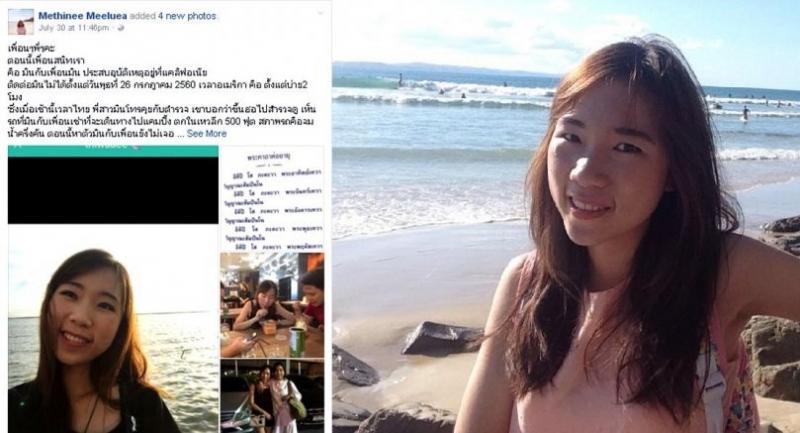 IT MAY take authorities a month before they can reach the rental car of two Thai students that plunged into a canyon in Kings Canyon National Park in California, while their families wait for visas to get into the US.

The vehicle was found submerged in the water at the bottom of a 150-metre cliff close to a highway that approaches the park, reported a Thai-language online newspaper in the US yesterday.

Postgraduate students Thiwadee Sangsuriyarit, 24, and Bhakapon Chairatanatongporn, 28, of South Florida University, went missing late last month on their way to the park. They were reported missing when they did not return to their hotel.

Thiwadee’s mother said she was hoping for a miracle and praying that her daughter was safe.

Police found 20-metre skid marks on the highway where the car was believed to have plunged over the cliff.

Bhakaphon’s mother said that her son, nicknamed “Golf”, had gone to study engineering at the university about 18 months ago. He was due to graduate in December and the family was planning to attend the graduation ceremony in the US.

She said she usually warned her son not to drive in the US as he was not used to the roads. However, she thought her son was the driver as she had been told that he had an international driving licence.

Now she said she was too sad to even look at his photos.

Both families were waiting for the visas to go to the US.

The car was found in a helicopter search at the national park.

However, the rough terrain, steep cliffs and fast-flowing river made the scene extremely difficult to access.

Siam Media online reported that California Highway Patrol had told Thai Consul General Tanee Sangrat that there was no space in the area for a helicopter to land safely.

The only way to access the accident site was by boat, the online newspaper said, but because of the melting snow and strong current it would be too dangerous.

“The rescue team may have to spend about a month to reach it, depending on the situation. They could not give an exact timetable,” reported the online newspaper.

Thiwadee’s family told a television station that she was majoring in environmental studies at the university and she loved nature and adventure travel.

They lost contact with Thiwadee on July 26 and were shocked when they learned of her disappearance from her friends.