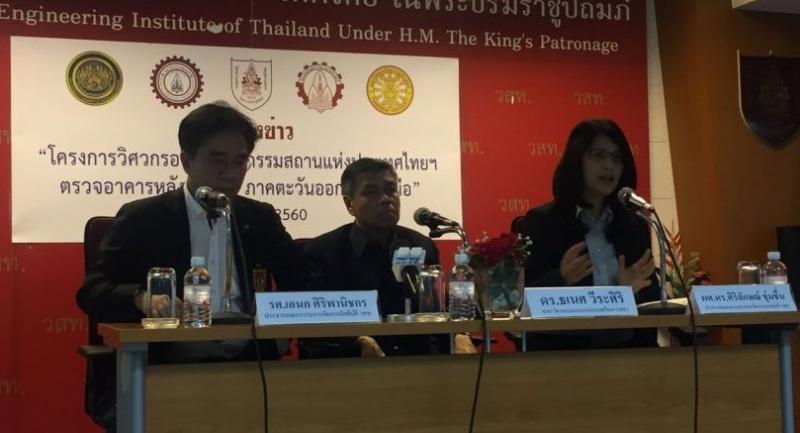 THE FLOOD crisis in Sakon Nakhon and other Northeastern provinces highlighted the need for local plans to handle disaster preparation and warning systems, the Engineering Institute of Thailand (EIT) urged at a press conference in Bangkok yesterday.

The institute staff also said there should be regular inspections of reservoirs and preparation plans in case of dam failure after a reservoir was damaged in Sakon Nakhon.

The head of the EIT committee on disaster management, Anek Siripanichgorn, said the flooding in Sakon Nakhon and other Northeastern provinces was a lesson about the failure of warning systems, adding that authorities should produce more locally orientated disaster preparation and warning plans to prevent the next disaster.

“Our disaster-warning system is usually on a national scale, and local people often do not get the information they need to handle an impending disaster. We need local plans to make sure the warning system suits the nature of the disaster in an area, which will reduce the damage and loss of life in case of disaster,” Anek said.

He also suggested that due to differences in geography and environment, local people should conduct terrain surveys using smartphone applications to understand areas that often have been affected by uncontrolled urbanisation. Anek said smartphones could also be used to warn people about disasters in a timely fashion.

“Every area should have a plan to handle and warn about each disaster. People should know how much time they have to get ready and evacuate, and where the nearest safe zone is,” he said.

The chairwoman of the EIT subcommittee on water resources, Siriluck Chumcheun, said the Sakon Nakhon floods rose so quickly mainly due to the enormous amount of rainfall in a short period, with 340 millilitres in three days in the Sakon Nakhon Basin.

Contradicting reports repeated in public, Siriluck said the damaged dam at Huai Zaikamin Reservoir had not played a major role in submerging Sakon Nakhon town, as there were only 2 million cubic metres of water in the reservoir, which is located on a different watershed than Sakon Nakhon and Nong Han Lake.

Instead, she said the floods were caused by the overflow from Nong Han Lake amid the heavy rainfall and poor water drainage from the lake to the Mekong River via the Kam River.

EIT president Thanes Weerasiri said the institute would send an engineering team to inspect the damaged reservoir on Saturday to repair it before the next storm, which is expected within the next 20 days.

“We are still unsure whether we can repair the reservoir in time, as we have to evaluate the damage first,” Weerasiri said.