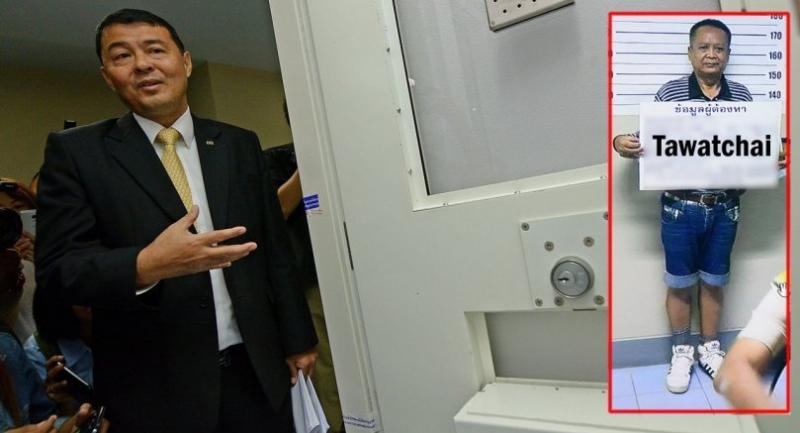 Case given to public prosecutors to find out who killed prime suspect in billion-baht land registration scandal.

THE CRIMINAL Court has ruled out suicide in the death last year of a former Land Department official while he was being held in a Department of Special Investigation (DSI) cell.

Tawatchai Anukul, 66, was a prime suspect in a land-deed registration scandal involving several hundred plots of encroached forest land in the South worth billions of baht.

In its ruling yesterday, the court said Tawatchai, who had worked as a senior Land Department official in the southern Phang-nga province, had died from the impact of a blunt object on his liver, which had caused rupture and bleeding in his abdominal cavity, as well as asphyxiation from hanging. The ruling was based on the testimony of experts who had no direct involvement with the case, the court said. The court yesterday ordered that the findings on Tawatchai’s autopsy be sent to the public prosecutors for further action.

As a result of the ruling, DSI director-general Paisit Wongmuang said his agency would cooperate with police investigators to find out who had caused Tawatchai’s death.

“Given the court ruling that Tawatchai’s death was caused by other people, it means a lot of people were involved with the deceased person,” Paisit said in a statement.

He pointed to the processes while Tawatchai was being detained, while the emergency team tried to save his life after he was found unconscious, and when he was pronounced dead at hospital.

“The DSI will study the court ruling and we are ready to cooperate with the police investigators to find out facts, witnesses and evidence so that the general public will know the reality,” Paisit said.

Following his arrest, Tawatchai was detained in a DSI cell in August last year. He was found to be unconscious at about 1am. An emergency team from Mongkutwattana General Hospital was called to the DSI facility and he was given resuscitation and breathing assistance, but he was pronounced dead shortly before 5am.

Tawatchai’s younger brother Chainarong said after the ruling that he was consulting with his lawyer for further legal action in an attempt to determine the person or persons who caused Tawatchai’s death.

Chainarong, who was also at the court yesterday to hear the ruling, had earlier said he was not convinced his brother had committed suicide while in DSI detention. He pointed to suspicious circumstances and facts, such as a DSI claim that the security camera at Tawatchai’s cell was broken.

In November last year, public prosecutors requested the court to hold an inquiry to determine the cause of Tawatchai’s death and find who was responsible. The hearings began early this year.

Yesterday’s ruling was postponed from July 25, as the final court order was not yet complete.

After hearing testimony from medical experts and first-hand witnesses, the court concluded that its inquiry could not determine who was responsible for Tawatchai’s death.

What was found during the inquiry was the fact that he died at 4.43am on August 31 in Bangkok’s Lak Si district.