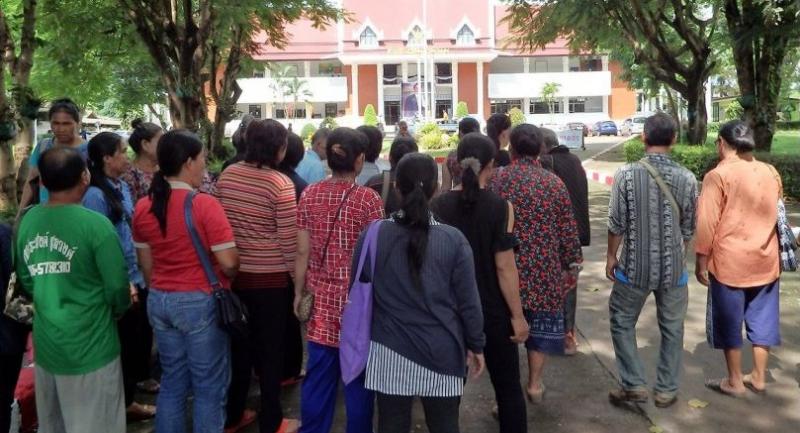 The Appeals Court on Wednesday upheld a lower court’s ruling in October to hand two-year jail sentences each to alleged Nakhon Phanom-based loan shark Supitcha Apichatphokhin, 56, and her subordinate for perjury.

Gathered at the court were about 50 people who had filed formal complaints against Supitcha over allegedly illegal loan services that reportedly not only charged excessive interest rates but also involved seizure of land put up as collateral. Many broke into tears of joy, and Salika was hailed as a hero who “puts the rich into prison”. Salika said she was thankful that justice had been served and she felt “liberated”.

Salika recalled that she had put three plots of land up as collateral for a Bt580,000 loan from Supitcha in order to fund her daughter and son-in-law’s trip to find jobs in South Korea in 2009.

Salika was then told at the land office that she would receive only Bt520,000 as Supitcha had immediately deducted Bt60,000 for a three-month-advance payment of the 3 per cent per month interest rate and other fees.

When she went to pick up the loan money from Supitcha’s motorcycle showroom, Salika was told to sign a document guaranteeing another loan worth Bt870,000 as an added condition. Salika said she did this because she had no choice.

After Salika secured a loan worth Bt500,000 from the Revolving Fund for Lending to Farmers and Poor People, she asked to repay all her debt but Supitcha then told her that the repayment amount was Bt1.4 million.

When Salika refused to pay that higher amount, Supitcha brought the case to court. In 2011, the Supreme Court ruled that Salika only had to pay Bt520,000. After paying that amount to Supitcha, Salika filed a police complaint against the alleged loan shark and one of her subordinates for perjury during the court trial. The prosecutor dismissed the case, so Salika hired a lawyer to sue Supitcha at the provincial court.

While she was waiting for the Appeals Court verdict, Salika claimed that Supitcha sent someone to ask her to drop the lawsuit in exchange for a Bt3 million payment. But she refused “because this investor [Supitcha] had taken advantage of poor people for a long time”.

Supitcha has been no stranger to controversy. An arrest warrant was issued on May 11 in a separate case, accusing her of public fraud, charging excessive interest on loans and forging a document.

Despite Supitcha’s insistence that she never exploited borrowers, police searched her three motorcycle showrooms in Muang Nakhon Phanom for evidence of loansharking. The number of complaints against her has risen quickly, from 17 in May to about 50 as of press time.