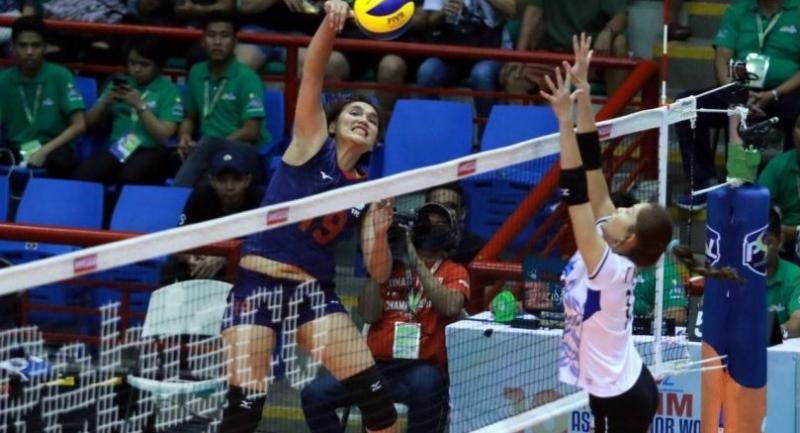 In-form Thailand brushed off Taiwan in straight sets 26-24 25-14 25-15 to claim the top spot in Pool D and advance to the round of the last eight teams at the SMM 19th Asian Senior Women’s Volleyball Championship at the Alonte Sports Arena in Binan City, the Philippines on Friday.

Thailand have already beaten Maldives and Iran in their first two matches of the top-tier tournament. The scintillating win over Taiwan on Friday gave Thailand a clean sweep in Pool D without losing a set to their respective rivals.

However, despite the loss, Taiwan, beating Iran and Maldives earlier, joined the former two-time Asian winners for the next tough round, where both Thailand and Taiwan will next go up against Pool B’s winners Japan and runners-up China in the Pool F playoff round.

Former three-time Asian champions Japan have already made a clean sweep in Pool B, while China, suffering a straight-set loss to the Japanese in their Thursday’s match, showed no mercy to Australia in a totally one-sided battle 25-13 25-8 25-9 in their last preliminary Pool B match on Friday.

Thailand, third place at the previous Asian meet in Tianjin, China two years ago, made a shaky start in the opening set to trail Taiwan all the way. However, coach Danai Sriwacharamaytakul fielded veterans Wilavan Apinyapong and Pleumjit Thinkaow to strengthen the team and his intention paid off impressively moments later. As Taiwan advanced 20-24, needing only one more point to wrap up the set, Thailand gradually pulled their game together. With Wilavan and Hattaya hitting powerfully at the net, Thailand closed the margin 24-24 and went on to win the hard-fought set 26-24.

The remaining two sets turned out to be comfortable battles when Thailand led from start to finish to win 25-14, 25-15 and match.

“We did not start well in the first set, but we just tried to avoid any mistakes at the end of the set and that’s what counts for the first-set win. After winning one set, we played with confidence. Everyone helped each other to attack and block. It’s great to win all three matches in Pool D. We next challenge China and Japan. I admit that daunting tasks await our team out there. We will try to do our best,” Thailand captain Pleumjit Thinkaow commented after the match.

Thailand topped Pool D following their straight three victories to collect 9 points. They next will play China, Japan and Taiwan in Pool F. However, as they have already beaten Taiwan, Thailand will take on only China and Japan in the top 8 playoffs, which will commence on Sunday. The result of the match against Taiwan, however, will be taken into consideration for the Thailand’s ranking.  Saturday is the rest day.