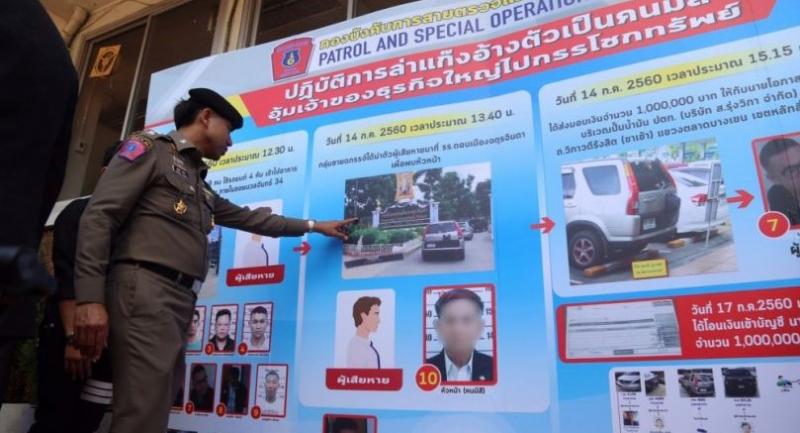 POLICE ARE preparing to probe the financial transactions of all suspects in the racket that allegedly extorted money from a Chinese businessman.

“The financial probes will allow us to determine who else is involved,” Pol Maj-General Surachet Hakpan, who heads the police force’s Patrol and Special Operation Division, said yesterday.

He was referring to the case in which the Chinese owner of Kanta Group Thailand and New Gen Airways, known as Surachai sae Yang, lodged a complaint with authorities that the gang had raided his firm on July 14 and forced him to pay Bt2-million protection money.

In the wake of the scandal, Nattakrit has been dismissed from the police force. At the time he allegedly committed the crime, he was working for the Economic Crime Suppression Division.

“These suspects have apparently had clear roles, duties and a plan so we are going to press an additional charge of being members of a criminal organisation,” said Surachet.

Police deputy spokesman Pol Colonel Krissana Pattanacharoen said the 10 suspects had already been charged with raiding the property of a person and jointly extorting money from the victim.

“We are going after them. Available information suggests that they have fled to the South,” Surachet said.

Defence Ministry’s spokesman Maj-General Kongcheep Tantravanich said the military would not protect Charoon if he were found guilty.

“This is on top of the criminal proceedings that police are handling,” he explained.

The only foreigner in the alleged extortion racket, Goh Teck Chuan, looks set to also be charged with fraud in a separate case.

Huai Kwang Police Station’s superintendent, Pol Colonel Kampol Rattanaprateep, said a Chinese woman lodged a complaint against Goh for allegedly taking Bt750,000 from her and not honouring his promise to help her obtain Thai citizenship.

“The victim married a Thai man but still could not get Thai citizenship when he passed away so she agreed to pay Goh when he said he could help,” Kampol said.