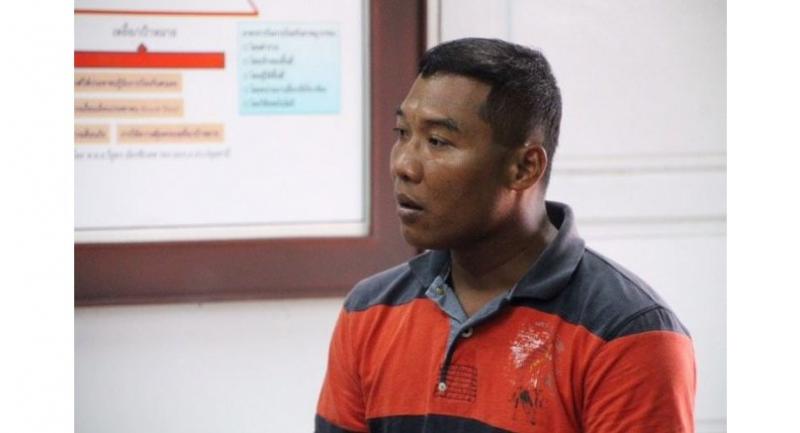 A FORMER soldier turned himself to police on Tuesday to deny allegations that he had joined other men in extorting Bt2 million from a Chinese businessman.

Thitikorn Chuen-ura, 38, claimed he was not aware of the extortion, adding that he and his four subordinates thought they were providing security services for a client.

He identified his client as Utis Korkaew, whom he had met one or two months ago. “Utis told me he wanted to get a businessman to meet Maj-General Charoon [Ampa]. We were there just as his security escort,” Thitikorn said.

The Chinese owner of Kanta Group Thailand Co Ltd, known as Surachai sae Yang, lodged a complaint with authorities alleging that a gang of men had raided his Bangkok firm on July 14, brought him to a meeting with Charoon and then forced him to pay Bt2 million in protection money.

Thitikorn said he had not understood the topic of his client’s meeting because it was conducted in English.

He said after receiving payment for the so-called security escort, he headed to Songkhla to attend the funeral of a relative.

“Later, I heard that my subordinates had had problems. I contacted Utis to help clear up the problems. But after two phone calls, I could not reach him again,” Thitikorn said.

A source said Thitikorn had also claimed to have provided security services at concerts and temple fairs.

Pol Maj-General Surachet Hakpan, who heads the police’s Patrol and Special Operation Division, said Utis had already contacted police to surrender. “But even if he does not surrender, we will hunt him down,” he said.

Last week, police arrested eight suspects including Charoon. Utis is now the only suspect on the run.

A source said Utis had told police he would turn himself in at 4pm today.