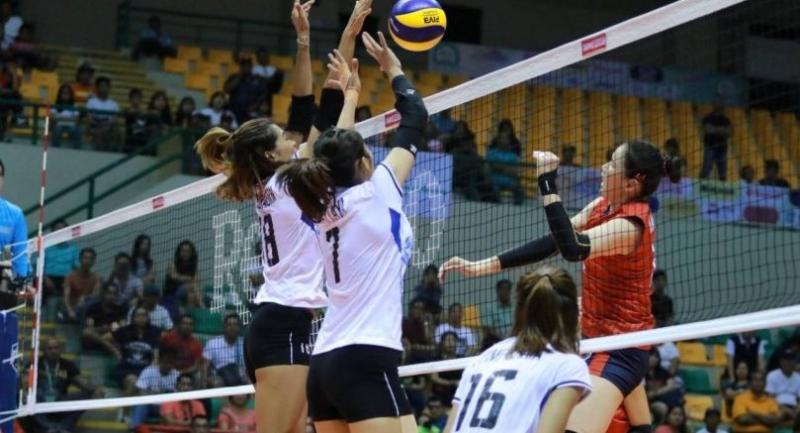 In-form Thailand stormed into the final of the SMM 19th Asian Senior Women’s Volleyball Championship for the third time in history following a stunning 25-20 25-20 25-21victory over the Incheon Asian Games Korea to set up a 2013 final rematch with Japan on Thursday.

Thailand remained strong in their starting line-up in the semi-final clash against the Korean, world No.10 and runners-up at the recent FIVB World Grand Prix Group 2. With veteran Pleumjit Thinkaow at the helm, the current world No.16 got off to a brilliant start to take an initial 6-1 lead in the opening set, thanks to an exceptional performance of a trio of young talents in the team, Chatchu-on Moksri, Pimpichaya Kokram and Ajcharaporn Kongyot.

Powered by superstar spiker Kim Yeon-Koung, who stands 192cm tall, Korea gradually put their acts together and caught fire shortly after that. With Kim attacking spectacularly at the wing, Korea came a whisker of catching up with the tough rivals as they reduced the margin 19-21. Still, Thailand had enough in their tank to hold them off. Thailand allowed Korea only one more point to clinch the thrilling first set 25-20.

Holding a 1-0 advantage, Thailand still stole the show briefly at the beginning of the second set. Chatchu-on and Ajcharaporn were devastating form as they took turns penetrating the Korean defence with exceptional attacks, while Hattaya Bamrungsuk and Chatchu-on made an excellent offensive combination to hand Thailand crucial block points. Thailand led 14-11 and stretched it to 19-14. As Kim became more prone with unforced attacking mistakes, Thailand grabbed the chance to counter-attack and block effectively to advance 22-17 and went on to win the set with the similar margin 25-20.

Thailand still shone through their exceptional form in the third set. Though putting up an aggressive fightback, Korea found the rivals uncatchable. The Thais stormed on to win the set 25-21, match and a final berth.

The scintillating win not only handed Thailand a final berth in the biennial for the third time, but also smashed the Korea’s sweet dreams of capturing their maiden Asian title in Manila. Since the tournament’s inception in 1975 in Melbourne, Australia, Korea have yet won the Asian title despite the fact that they have made it to the final for seven times

Thailand will next go up against Japan, the team they had lost three times in a row within 30 days including two losses in the recent World Grand Prix. The Thursday’s final will be the second showdown between Thailand and Japan in the Asian Championship. In the 2013 Asian meet on their home soil in Nakhon Ratchasima, Thailand beat Japan for the second Asian title after they captured their first-ever Asian crown in Hanoi, Vietnam in 2009.

“It was a good match as we counter-attacked quite well. I think Kim Yeon-Koung also played her best today, but we just tried to read her game and pushed her aggression to the limit. Against Japan in the final showdown, I think a tough task awaits us. We have already lost to them for three times in a row. Japan are a strong team. We lost to them, but we have already improved the mistakes in that match against them. I think our victory today will be a good answer for tomorrow’s showdown,” Thailand head coach Danai Sriwacharamaytakul commented after the match.