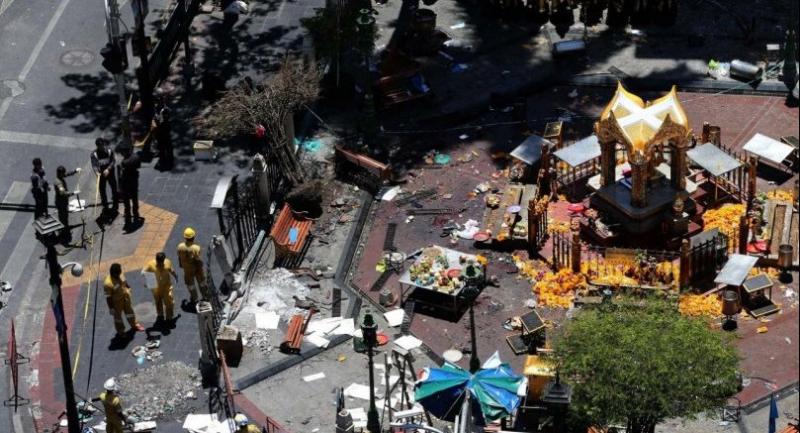 ONLY ONE person has been interrogated about the horrific Ratchaprasong bomb of August 2015 and it is now feared justice may not be reached for several more years.

Yesterday marked the two-year anniversary of the deadly bomb attack at the famous Erawan Shrine tourist destination in Bangkok, which killed 20 people and injured 125 others. Internet Law Reform Dialogue (iLaw) says the case has progressed very slowly due to language difficulties, the large number of witnesses and the military court system.

Two Uyghur suspects, Adem Karadag and Mieraili Yusufu, were arrested following the police investigation. Adem, also known as Bilal Mohammed, confessed to being the bomber but later retracted his confession and said he had only admitted guilt because it had been forced out of him by officers. Both suspects were sent for trial at Bangkok Military Court but no verdict has been reached even though the trial was due to start a year ago.

Yingcheep Atchanont, iLaw coordinator, says the prosecution has failed to progress because only one witness has been interrogated in the two years since the attack.

He said this was a bad situation insofar as providing justice for both the victims and the defendants.

“From our observation of the court proceedings, we noticed that the witness interrogation during the first court was very slow because statements in court had to be translated into English and then into Uyghur,” Yingcheep said.

According to iLaw, the two defendants have already attended court 13 times over the last year and the military attorney has declared that 447 witnesses must be questioned before the court can rule. It has therefore been estimated that the case will take up to seven years to be concluded.

Yingcheep said the high number of witnesses was not the only problem - Military Court procedure was also slow and long periods of time elapsed between court dates.

Yingcheep said the slow pace of proceedings was in no one’s interest. “We also worry about the living conditions of both suspects, because the officers have not allowed outsiders to see them in their cells,” he said. “Even their lawyer has experienced difficulties visiting them. We can only hope that both suspects are treated well and their rights and dignity are respected.”

Royal Thai Army Commander in Chief General Chalermchai Sitthisart said security surveillance had continued to be tight in Bangkok since the attack. He would not comment on the slow court proceedings, saying only that the case was still ongoing.

Deputy police spokesman Pol Col Krisana maintained the case was progressing in line with normal court procedure and police had finished their enquiries and closed the case.