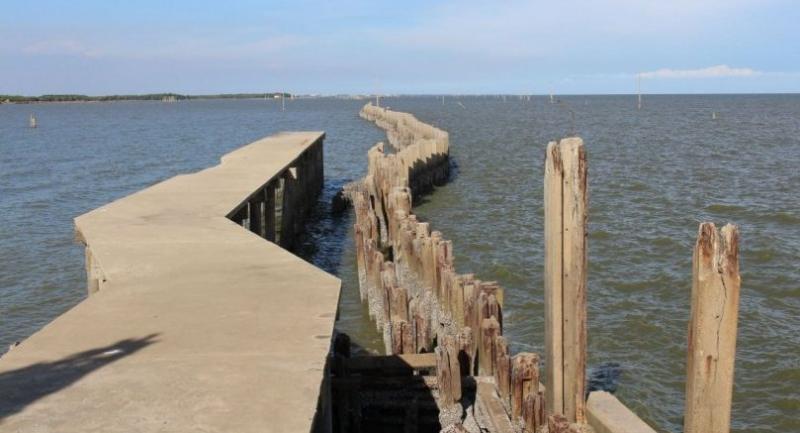 SUBSIDENCE CAUSED by human activities in Bangkok Metropolitan areas is the most important factor causing shoreline erosion in the Bay of Bangkok, followed by rising sea levels, a recent study has shown.

However, experts advise against constructing hard structures to prevent erosion, which could instead intensify the problem, and instead focus on mangrove reforestation to address the problem.

Looking through a thin layer of mangrove forest along the coastline of Samut Prakan’s Phra Samut Chedi district, observers can see a small temple situated on a bizarre seaside. The temple is Wat Khun Samutchin, a relic of an old community that has sunk into the sea, a clear sign of the danger that shoreline erosion poses to Metropolitan Bangkok.

Thanawat Charupongsakul, director of Thailand Global Warming Academy, outlined the challenges of coastal erosion on a field trip last Thursday to Wat Khun Samutchin in one of the worst-hit areas of coastal erosion. The inner Gulf of Thailand, especially the 120 kilometres of the northernmost shoreline of Samut Prakan, Bangkok, Samut Sakhon and Samut Songkhram, is particularly vulnerable to erosion and sinking into the sea, he said.

Thanawat added that the shoreline erosion rate of the area was as high as 30 metres per year. If no action is taken, 150,000 rai (24,000 hectares) of land could consumed by the sea over the next 50 years. With such rapid changes underway, this is a problem that everyone, especially residents of Bangkok, should consider, Thanawat said.

“From my study, subsidence contributes to 68 per cent of the current problem of shoreline erosion, along with 16 per cent due to the sea level rising, 6.8 per cent from a lack of sedimentation, and 2.4 per cent from river delta dredging,” he said.

“These factors are all the result of human activities, especially the subsidence, which is mainly a result of urbanisation of the Bangkok Metropolitan area.”

Surajit Chirawate, a former Samut Songkhram senator, said that if people were serious about preventing Bangkok from sinking into the sea, they needed to move away from using hard structures such as concrete sea walls, jetties and breakwaters. Not only would such structures fail to solve the problem, they would actually intensify the impact of coastal erosion on nearby areas, he said.

“We have a problem. Authorities do not understand nature and construct hard structures to protect the coastline, which has already proven ineffective in places such as Rayong’s Seangchan Beach and Songkhla’s Samila Beach.”

Hard structures make waves stronger, which then dig out the sediment from beneath the structure and intensify erosion, he said. However, there are alternatives including soft structural barriers such as bamboo fences that break the wave force and trap sediment behind the fence line.

“The entire coastline of Samut Songkhram uses bamboo fence as a wave breaker and we found that it is a cheap and effective way,” he said. “We found that the sediment built up rapidly behind the fence, and then we grew mangrove forests to hold together the land we reclaimed.”

Such solutions were cheaper than hard structures, he added.

According to the coastal erosion database compiled by the Thailand Coastal Spatial Database System of Geo-Informatics and Space Technology Development Agency, Samut Prakan’s Phra Samut Chedi district has suffered the most erosion over the past 10 years, with up to 390 metres wide of shoreline lost since 2005.

In contrast, Tambon Klong Khon of Samut Songkhram reclaimed up to 270 metres wide from the sea since 2005.

Preserving a healthy mangrove forest also helps protect the coast from erosion, which can be demonstrated by Google satellite imagery. Images show a lush mangrove forest in Tambon Klong Khon, while in contrast the coast of Phra Samut Chedi district has been left with only a thin line of mangrove forest, where there is any at all.