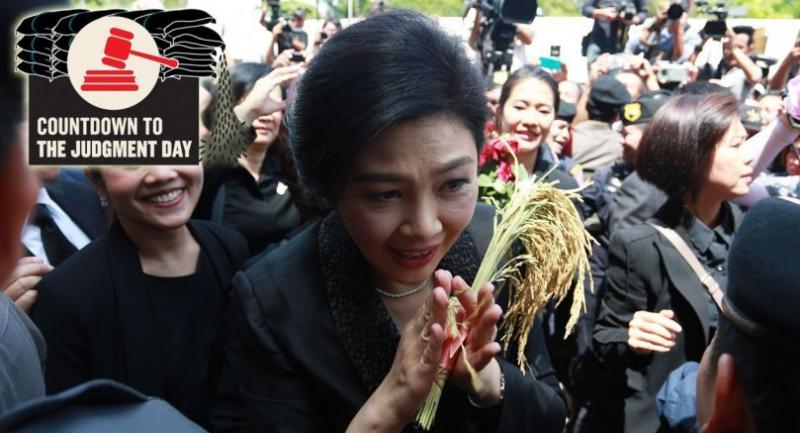 WHILE THE political scene after the upcoming court judgement in the case against former PM Yingluck Shinawatra may not be suddenly affected due to suppression by the junta, the verdict itself could be a reminder to future governments to not “cross the line”, say political figures and observers.

The country is anxiously holding its breath to see if chaos arises after the Supreme Court’s Criminal Division for Political Office Holders delivers its verdict on Yingluck in the rice-pledging scheme on Friday.

Pheu Thai Party former minister Chaturon Chaisang said it was hard to comment on the case since legal processes against Yingluck had not strictly followed the rule of law.

The proceedings had contained many “irregularities” due to the junta’s Prime Minister Prayut Chan-o-cha’s direct order to particularly scrutinise the damage caused by the rice-pledging scheme and add evidence after the case had started, he said.

Whatever the ruling, he said it should not politically affect Yingluck and Pheu Thai any further, adding: “We have already been curbed in the political arena by existing laws, in line with the will of the powers-that-be.”

A former Democrat Party MP, Warong Dechgitvigrom, a key critic of Yingluck’s project, said he was optimistic about the ruling, saying it should help create more awareness among future governments on the consequences of corrupt actions.

“Pheu Thai will portray itself as a victim as always,” Warong said. “It’s not wrong to help the poor but it is wrong to seek an advantage from policymaking. Any government, including that of the Democrat Party, has to be subjected to scrutiny.”

A key figure in the United Front for Democracy against Dictatorship, Weng Tochirakarn, said Yingluck’s case could discourage future governments from coming up with new policies, fearing that they could break law in the process.

What has happened to Yingluck was one example of bureaucracy usurping the role of the judiciary and politicians, Weng said.

“Yingluck declared the rice-pledging scheme in Parliament, followed it and did not touch a baht involved in the case, yet she has become a defendant,” he added.

People’s Democratic Reform Foundation President Suthep Thaugsuban, while choosing not to hypothesis about future scenarios, insisted that he believed in the standards of justice in Thai courts.

Satithorn Thananithichot, a researcher in politics at the King Prajadhipok's Institute, believed the ruling should not affect the opinions of “political fans”. What mattered instead, said Satithorn, was how people not usually interested in politics viewed it.

“If the ruling is negative, an affected political party may use it to gain legitimacy and draw attention to itself,” Satithorn said. “But if the ruling comes out clear and fair enough, any ripple should be automatically settled.”

Independent academic Sirote Klampai-boon said he feared the legal case against Yingluck could create a precedent for politics and the judiciary in the future.

The prosecutors’ reasoning that the rice-pledging scheme lacked the support of academics or the involvement of the constitutionally independent auditor could indicate some “political irregularities” in the preparation and management of the case, Sirote said. “If this should become a legal standard, damage will be done to the judicial process.

“Meanwhile, if this standardises future politics, damage will fall upon our society,” Sirote said.

Super Poll results released yesterday showed that most people did not expect the ruling to improve the ailing political scene.

Of 1,309 people questioned nationwide from August 11-18, 49 per cent said post-ruling politics were likely to remain as bad, 54 per cent were concerned about possible upcoming conflicts, and 79 per cent said that the current authorities should take action to ensure public order.

However, business leaders did not appear to be as worried about the impact of the court verdict.

Kalin Sarasin, chairman of the Board of Trade of Thailand and Thai Chamber of Commerce, said the private sector had confidence in the outlook for the economy as the government had laid out a strategic development plan and many reform committees had been recently created to carry out reforms.

Stanley Kang, chairman of the Joint Foreign Chambers of Commerce in Thailand, said the public may be worried about conflict arising from the court verdict but such political events would not have much effect on the economy. Politics and the economy do not correlate strongly with each other, he said.