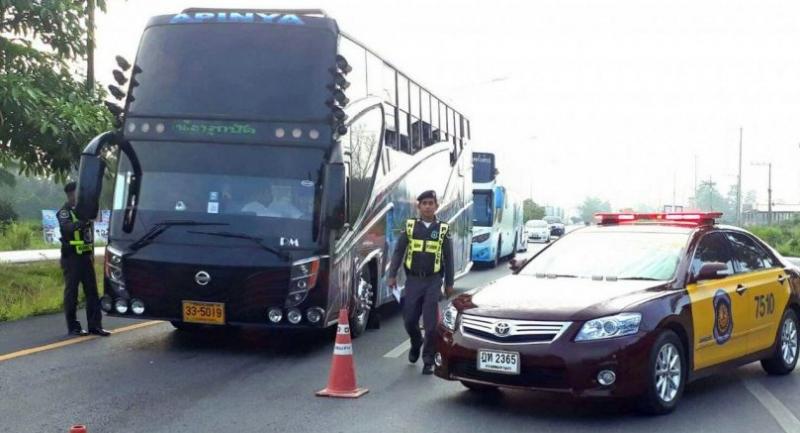 Justice Ministry officers are being allowed to take a day off today to avoid the expected mass gathering to support former prime minister Yingluck Shinawatra.

The Justice Ministry unofficially announced that staff who do not have to deal with the public directly could take a break as supporters of the former prime minister were expected to show up at their workplace in Government Complex.

The ministry also asked officials to avoid bringing their own cars and use public transport because there would be tight security and intensive car inspections. Executives ranking higher than division heads have to go to work, but they were advised to park their cars in an alternative car park behind Government Complex. Meanwhile, the ministry assured the public that there would not be a problem as officials had already prepared plans to control a political gathering.

The public is advised to check the traffic situation at the hotline 1197 or via the mobile application POLICE I LERT U before starting journeys.

The 120-kilometre-long Mittraphap Road, the main highway connecting the Northeast with Bangkok, was staffed with five main checkpoints scrutinising passengers heading to the capital.

Officers at checkpoints along the way are especially focusing on public transport such as passenger vans, checking for weapons.

A source close to local red-shirt leaders estimated that less than 1,000 people, including ex MPs, from the region would travel to show support for the former prime minister.

Most people would travel separately in small groups via private vehicles, airplanes and trains, the source said.

A police source said checkpoints in Khon Kaen’s Ban Pai district had been operating 24 hours a day, with increased vigilance after reports of drugs and weapons smuggling in the past few days.

Police, soldiers and Interior Ministry officials yesterday set up additional checkpoints on three major roads in Ubon Ratchathani leading to Bangkok in a last-minute effort to prevent Yingluck supporters from reaching the capital.

A source said red-shirt leaders had not organised transport for supporters of the former prime minister because they had been under close scrutiny by the military.

A red-shirt leader denied a news report that he had arranged trips to the capital for Yingluck supporters involving the rental of 20 passenger vans, adding that people would travel on their own using public transport.

Sompot Prasartthai, who is based in Nakhon Ratchasima province, was visited by officers from the Internal Security Operations Command yesterday following the report.

Sompot said people were aware of what they were doing, would not cause trouble for the public and were willing to cooperate. Instead, officers should watch out for a “third party” with ill intentions who might intervene and cause disorder that would be blamed on the red-shirt movement, he said.

The Provincial Police Region 4 in charge of 12 upper northeastern provinces has instructed officers to follow the news regarding the judgement today, including social media, from 8am to 4pm. Officials were also told to set up 40 checkpoints in the area.

The region’s deputy commander Pol Maj-General Chitcharoon Sriwanich said police had been closely monitoring the situation and movement of activists and red-shirt supporters since Monday.

Khon Kaen is one area of focus where five checkpoints had been set up along the route to Bangkok. Bus terminals and airports had been under a 24-hour watch, but no disturbances had been detected, Chitcharoon said.

Some supporters from the upper northeastern provinces were travelling to the court but not in big groups, he said, adding that none of them were being led by local leaders, who had assured police that they were not attempting to mobilise supporters. Police are checking vehicles and asking travellers about their destinations. Most of those questioned said they were going to Phitsanulok and to the city’s airport.

No irregularities or movements by Yingluck supporters had been found so far, authorities said.

Tak officials have been checking vehicles leaving the northern province since yesterday morning in an effort to prevent a “massive turnout” at the Supreme Court offices today. A source said officials were interviewing motorists and passengers in vans about their destinations at various checkpoints.

However, there had not been any reports that groups were being stopped from travelling by officials.

Other sources said military officials had talked to several local red-shirt leaders in Mae Sot, Mae Ranad and Muang districts, but the leaders said they had distanced themselves from politics so they would not travel to Bangkok.

However, another source said five or six red-shirt leaders had already gone to Bangkok on their own.

At least 500 supporters of the former prime minister had already travelled yesterday in small groups from Chiang Rai to Bangkok to rally in solidarity with Yingluck, a source said.

The source said the supporters did not want to pressure the Supreme Court but simply wanted to show moral support for Yingluck, adding that they had not been hired but they all loved the former prime minister.

The source said some supporters had chosen to stay home to show moral support because of the difficulties in travelling and the limited space allocated for supporters in front of the Supreme Court offices as well as the blockade by authorities.

A military intelligence officer said there had not been many activities in Chiang Rai and officials were closely monitoring various groups.