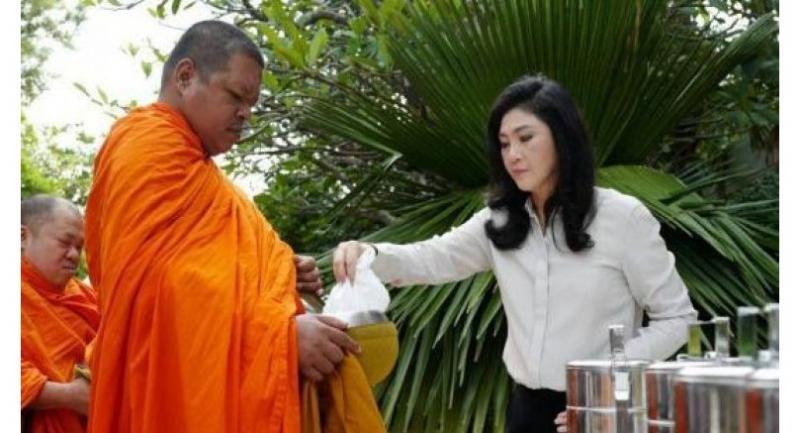 Former Thai Prime Minister Yingluck Shinawatra gives out alms in a merit-making ceremony at her residence in Bangkok in a photo posted on August 23 on her Facebook.

Cambodian officials Sunday dismissed media reports that former Thai Prime Minister Yingluck Shinawatra fled the country to Dubai via Cambodia ahead of a court decision, saying they had “no record” of such activity and calling the reports “rumours”.

Yingluck was scheduled to appear at the Thai Supreme Court’s Criminal Division for Political Office Holders on Friday but failed to show up. The court was going to announce a decision on her alleged negligence in a rice-pledging scheme.

After she didn’t appear in court, border officials and sources

speculated that Yingluck could have boarded a speedboat from Rayong to an island such as Koh Chang, Koh Kood or Koh Laoya, in Trat province, before travelling on to Cambodia.

Officials in Pursat province in Cambodia Sunday said Thai officials had closed an illegal border crossing in Mueang district in Trat province on August 19, though they claimed it was for an unrelated issue.

Officials in Thailand, Singapore and Dubai didn’t respond to requests for comment Sunday.

Reports had it that Yingluck got help to secure a Cambodian passport in order to travel to Singapore in a private jet and later fly to Dubai, where her older brother, Thaksin Shinawatra, ousted as prime minister in 2006, is now believed to be living in self-imposed exile.

However, Cambodian officials denied the claims of Yingluck making her escape through Cambodia. Chhay Buna, who is in charge of border checkpoints, claimed it was just a “rumour, and not true”.

“If Yingluck crossed the border, [she] may have been seen by other people around, but no one [saw her],” he said, calling the media “unprofessional” for not asking Cambodian officials to confirm the information.

“[They] only put their own analysis,” he added.

Meanwhile, Sok Sophorn, deputy chief of the Passport Department, maintained his department only issues passports for Cambodian citizens. “Ms Yingluck [is] Thai, she is not Cambodian, so I don’t issue a passport to the foreigners.”

Sophorn said he would only investigate the claim that Yingluck received help obtaining a Cambodian passport if he was assigned to look into the issue by his superiors.

A spokesman for the Ministry of Interior’s Immigration Department, Lieutenant General Kerm Sarin, maintained there was no report in the system of Yingluck having departed to Singapore from Cambodia, or of her being issued a Cambodian passport.

Sarin added officials with his department were not in communication with Thai authorities as of Sunday.

If Yingluck is found guilty, she could face a maximum of 10 years in prison and a lifetime ban from politics.

Hun Sen is reputed to have close ties to Yingluck’s brother Thaksin, whom the premier in 2009 referred to as his “eternal friend”, offering a residence in Cambodia three years after Thaksin was convicted on corruption charges. That same year, the Cambodian government said it would not extradite Thaksin, with Hun Sen telling reporters that Thaksin could serve as his “economic adviser”.

Yingluck’s family has other ties to Cambodian politicians too. In 2013, the daughter of Yaowapa Wongsawat, another of Thaksin’s younger sisters, married the son of Cambodian lawmaker Seang Nam. Nam couldn’t be reached for comment Sunday.

If it were true that Yingluck fled through Cambodia, she wouldn’t be the first one to have escaped to the Kingdom. Jakrapob Penkair, a former minister and adviser to Thaksin who helped to found the country’s “Red Shirt” movement, fled to Cambodia a few years ago. He didn’t respond to a request for comment Sunday, but is still believed to be in exile in Cambodia.