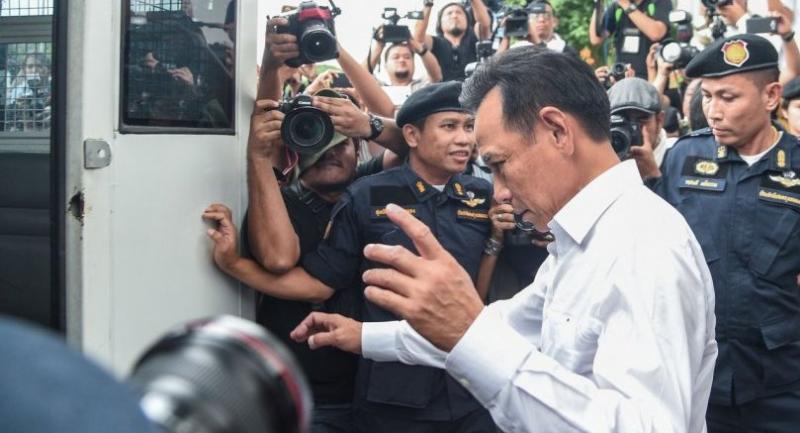 FORMER COMMERCE minister Boonsong Teriyapirom, who has been jailed for malfeasance of duty over the Yigluck government’s rice-pledging scheme, yesterday advised his wife to drop a charge against top officials who froze both of their bank accounts as part of the government’s civil liability lawsuit against him, said their lawyer, Narin Somnuek.

Poyjairapee had filed the lawsuit against the chiefs of the departments of Foreign Trade and Legal Executions after they froze the couple’s assets, including her two bank accounts.

The Central Criminal Court for Corruption and Misconduct Cases yesterday postponed its verdict on the alleged misconduct to August 31, but Boonsong said he wished to drop the charge as he wanted his wife to stay away from public attention, said the lawyer.

Boonsong has been sentenced to a 42-year jail term for faking government-to-government rice export deals, resulting in Bt16-billion financial damage to the state during the previous government’s implementation of the rice-pledging scheme. He is subject to making reparations worth around Bt1.7 billion.

Narin said his team of lawyers is also preparing to seek the ex-minister’s temporary release from jail, as he will petition the Supreme Court for a review of his sentence. They need to go through the bail proposition draft to ensure that they give the best reasons for the court to consider, he added.

It would probably be submitted to the court by next week, he said.

Boonsong’s wife visited him at Klong Prem Central Prison yesterday and found that he was still stressful and anxious. Narin said that Boonong had already seen a doctor in prison and would have another appointment.