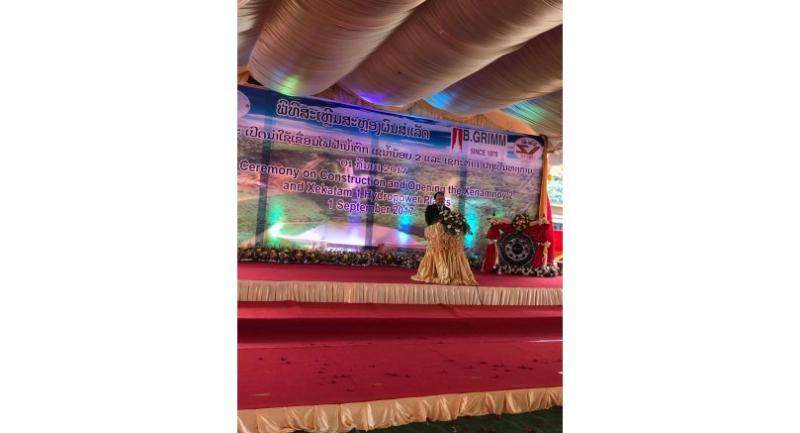 THE LAOS government is leveraging its rich hydropower resources in a bid to lift the country out of lower-middle income status by 2020.

Speaking at the official opening of the Xenamnoy 2-Xekatam 1 hydropower plant in Champasak province on Friday, Minister of Energy and Mines Dr Khammany Inthirath said the landlocked country has progressed rapidly in producing electricity, which it now supplies to local communities as well as Thailand and other Asian countries.

Under the country’s development plan 2016-2020, Laos aims to graduate to a middle-income country, and the energy sector was vital for this, he said.

Most power is generated by hydro plants due to the country’s rich water resources and mountainous areas that are suitable for electricity production. Laos also uses coal-fired plants to generate electricity.

He acknowledged that there might be a few communities in remote areas that could not access this clean energy by then.

“We also plan to invest in transmission power lines linking the Northern, Central and Southern regions as well as connecting with Asean countries,” Khammany said.

There are now 53 power plants under construction with additional production capacity of between 7,000 and 8,000 megawatts.

By then, the country would have about 100 power plants.

Increased electricity generation would also contribute to growth in tourism, industry and the agricultural sectors.

He said that the country had potential to produce total hydropower of about 26,000 to 27,000 megawatts, and more than 5,000 megawatts from coal.

Southern Champasak province, which shares a border with Thailand’s northeastern Ubon Ratchathani province, has the potential to produce hydropower up to 8,000 megawatts, he said.

The new hydro power plants are small in scale and have minimal impact on forests and local communities, said Khammany. He was apparently responding to international criticism and pressure on Lao over its plans to build two large dams on the international Mekong River that would have an environmental impact beyond the country’s borders.

According to the World Bank, Laos is a lower-middle income country with annual per capita income of US$1,740 (Bt57,726) in 2015. It is a fast growing economy, with gross domestic product (GDP) expanding 8 per cent yearly on average over the past decade.