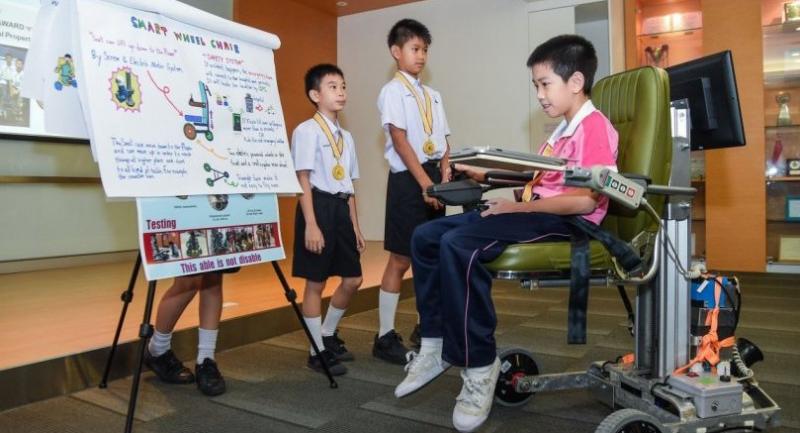 Thai students demonstrate how to use their invention, the so-called “Smart Wheelchair”, at the 2017 Korea International Youth Olympiad 41 in South Korea last month. The innovation won a gold medal at the event.

Held under the theme of inventions for the physically challenged in mid-August, the International Youth Olympiad 41 attracted entries from children coming from 12 nations.

Young Thai students from the local primary school shone brightly in the competition. Take Nattapat Subsompon, a Prathom 5 student, for example. He received not just a gold medal in the contest, but also the Special Award: The Best of Best Invention from the World Women Inventors and Entrepreneurs Association.

“I was inspired to develop a door opener for wheelchair users after seeing how my elderly grandma has difficulty opening a door from her wheelchair,” he said.

He added that this tool was especially designed to make daily life more comfortable for wheelchair users.

“It can open various kinds of doors, including a sliding door,” Nattapat said.

He is a member of the Satit Chula Innovation Hub, which has honed many young talents.

“To date, our primary students can create 19 innovations, some by individuals and some by teams,” he said.

The other gold medal for the Chulalongkorn University Demonstration Primary School came from the team of Nattayadanai Pintanont, Pannatorn Pinijwongwittaya, Naruchon Chinnawattanakul and Jeerateep Kosawisut, who invented a “smart” wheelchair. A pair of silver medals were awarded to two other teams for inventing a “smart” walking stick and a cognitive development tool.

A bronze also went to a team that created a high-tech cane for the blind.

Jeerasak said the latest contest in South Korea was based on a good theme, because it encouraged children to learn more about people living in their society, have sympathy and understanding for the physically challenged, and come up with thoughtful ways to extend help.