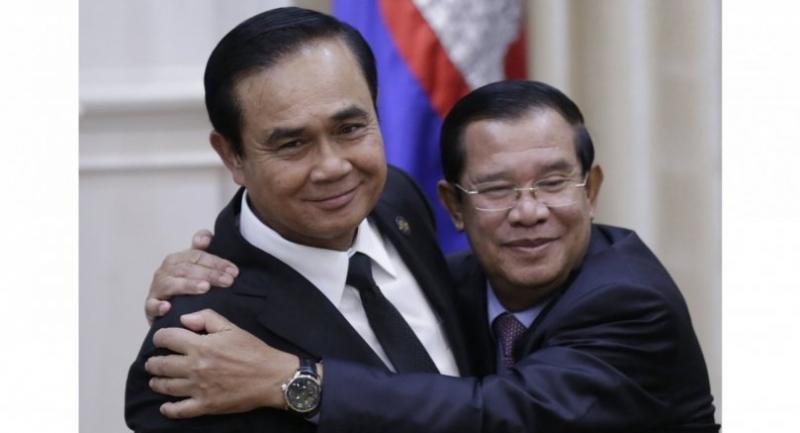 Thailand is willing to provide more assistance to Cambodia to improve its farm products and speed up the opening of more border checkpoints to facilitate trade and travel, Prayut said in a joint press conference after the meeting. On connectivity, both sides agreed to fulfil an agreement on the rail link from Thailand’s border province of Sa Kaew to Cambodia’s capital city of Phnom Penh, he said. It would be a historic railway project to connect Thailand and other neighbouring countries in the Mekong basin, he said.

Hun Sen said both countries would boost bilateral trade and Thailand had agreed to buy more farm products from Cambodia as well as open four additional border checkpoints in the near future. Both countries have set targets to improve bilateral trade to reach US$15 billion (Bt496 billion) by 2020, according to Thai Deputy Government Spokesperson Werachon Sukhondhapatipak. To reach the target, the two countries have to facilitate border crossings and trade as well as contract farming, he said.

The two premiers also witnessed the signing of two documents – the Joint Declaration for the 3rd Thailand-Cambodia Joint Cabinet Retreat, to reaffirm both countries’ commitment to promote “Enhanced Partnership for Peace and Prosperity” and the Agreement for the Avoidance of Double Taxation.

Deputy Prime Minister Prawit Wongsuwan, who was also part of the delegation, said relations and cooperation between the two countries on security matters was excellent at all levels.

The defence ministries, armed forces and other joint mechanisms had good relations and worked well, he said, and they would establish a communication hotline at all levels to coordinate security matters, he said.

Among the issues for border security was illegal logging, notably of rosewood, according to spokesman Werachon, who added that the number of timber smuggling cases, as well as clashes between smugglers and Thai security forces, reduced significantly over the past year.

However, the controversial Stung Nam hydro power project, which was suspended by Prayut shortly before his departure to Phnom Penh, was not discussed, Werachon said.

The plan to purchase electricity from the 24-megawatt dam in Cambodia’s Koh Kong province and get free fresh water for the Eastern Economic Corridor (EEC) was put on hold because the electricity price was too expensive and the investment cost for a pipeline to transport water from the border to the EEC was too high.

Cambodian investor Ly Yong Phat of LYP Group told local newspaper Khmer Times that the delay in the deal was due to time constraints by both sides that could not process the documents on time.