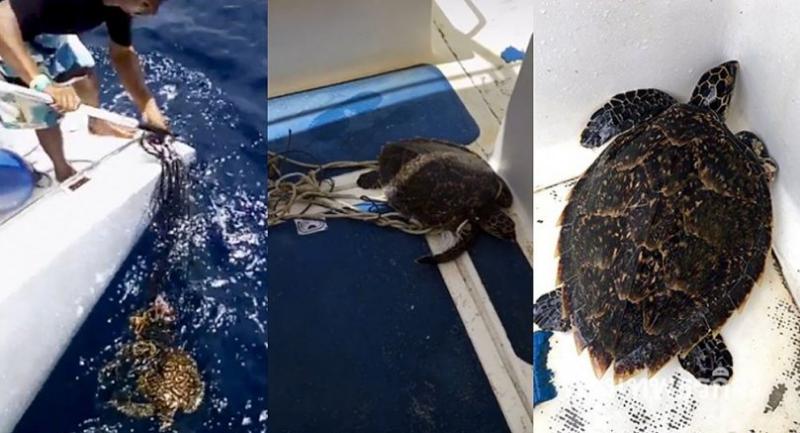 More turtles were saved this week after being trapping in fishing nets near Phuket, and the local tour operator sees it as a positive sign that the area’s once-damaged marine ecosystem is recovering.

Over the course of three days starting last Tuesday, at least four turtles have been saved from entanglement in fishing nets. Three of them were found injured and were quickly sent to Phuket Marine Biological Centre for treatment, while the fourth turtle was unhurt and released back to the sea.

In the latest incident on Thursday, the captain of tourist boat Nonthasak 7 rescued a rare hawksbill sea turtle from a fishing net while travelling between Koh Bon and Hai Rawai. After discovering injuries to the turtle’s front right fin, the captain brought the turtle onboard the boat and handed it over to officers for treatment.

Tour operators in the Phuket area have found many sea turtles entangled in fishing nets, said Khan Therdmaefahluant, manager of Nonthasak Marine Company. Entanglements are most common in the sea between Ao Chalong and Koh Racha.

This week’s rescues were not the first time that local tour boats have rescued sea turtle, said Khan. Last week, another of his company’s tour boats found a turtle stuck in a fishing net and helped release it back to the sea. Tour operators with other companies have also found turtles trapped in fishing nets.

The increase in entanglements is partly a good sign, he said.

“This is a result of our campaign to look after the marine ecosystem. It’s brought the sea turtles back to their natural habitat after not being seen in the area for a long time.”

More needs to be done, though, he said. Nets from the intensive fishing activity in the area are trapping many of the returning turtles.