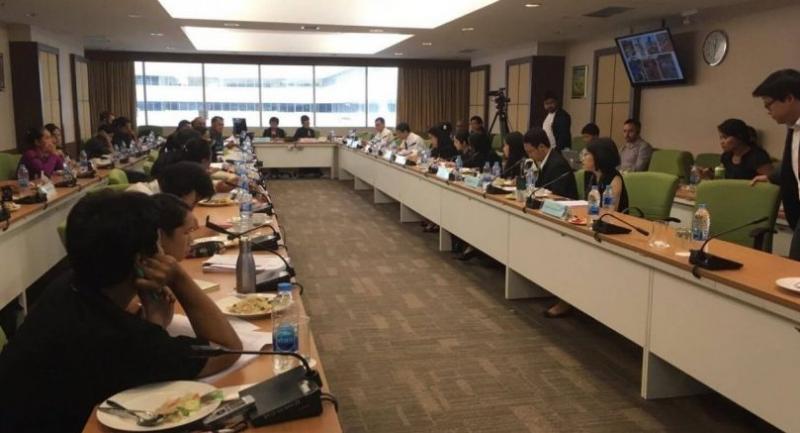 THAI OVERSEAS investors have been urged to respect human rights wherever they are doing business and work closely with the National Human Rights Commission (NHRC).

Agencies that oversee direct investment in other countries met yesterday with the NHRC to report on their progress relating to Cabinet resolutions issued on May 16, 2016 and May 2, 2017, which called for Thai foreign investors to respect and protect the human rights of local people.

The resolution also called for investors to come up with strategies to prevent adverse impacts to the environment and local people’s livelihoods, and ordered relevant agencies to promote a good understanding among investors to respect human rights. Human rights were highlighted as a critical issue, as the NHRC has received 12 complaints about Thai investments in Myanmar, Laos, Cambodia and Vietnam, claiming projects harmed the environment and well-being of local people.

The complaints involved the Italian-Thai Development PCL’s operations in the Dawei Special Economic Zone in Myanmar, the Heinda tin mine by Myanmar Pongpipat, the Xayaburi Dam in Laos by Ch Kanchang and a sugar cane plantation land concession in Cambodia by Mitr Phol Group.

Natapanu Nopakun, a representative from the Foreign Affairs Ministry, said the ministry had always pushed the importance of human rights among Thai investors, although awareness on the issue was still low. “We understand the importance of protecting human rights of people in the countries where we invest, because their well-being is as important as that of the Thai people,” Natapanu said.

He said the ministry had studied the approach used by investors from South Korea, Sweden and Singapore to learn from those countries and come up with measures to monitor the issue and prevent negative impacts.

Atthasri Soithong, from the BOI, said that even though the policy was quite new for his organisation, the BOI had tried to encourage investors to comply with the law and regulations of the destination country.

“We do not have the power to benefit or control the investment abroad, because we are only a facilitator for Thai investors in other countries, but the nature of business is to avoid problems with local people,” Atthasri said.

“We have to balance between the profit for business and corporate social responsibility, as investing in other countries already has a high risk.”

“The heart of investment monitoring and negative impacts prevention is information transparency. The state regulators such as the BOI and the BOT should work proactively with the NHRC to monitor problematic investments and let investors explain their operations to the stakeholders,” Sarinee said.