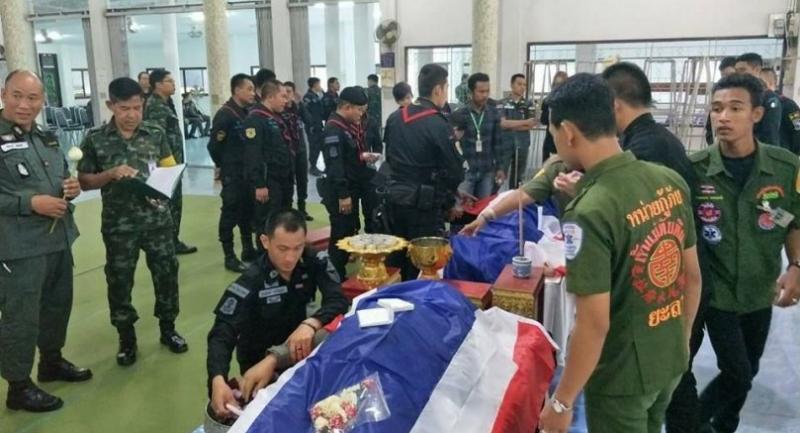 Officials prepare for bathing rites at Wat Phutthaphum in Yala’s Muang district on Friday for the two security personnel who died in Thursday’s bomb ambush./Photo Courtesy of Facebook.com/Palangjai

Explosive Ordnance Disposal (EOD) officer Pol Senior Sergeant Major Aneroot Janthawong – one of the two officers killed in a deadly bomb ambush in Yala on Thursday – had been cleared last October for a posting in his home province, Loei, but instead volunteered to serve in the deep South.

The information was shared on Friday at Facebook.com/Palangjai, a page set up in tribute to state officers serving in the restive region that has more than 114,500 followers. Visitors can offer prayers for Aneroot's spirit to rest in peace.

The page administrator said Aneroot, who was known as “Darb Yak”, was born in Ban Nam Khaem in Loei’s Tha Li district and endured a difficult life before joining the police force and serving in Phitsanulok.

He was approved for transfer to Loei in October, but volunteered to serve as an EOD officer in the southern border provinces, often a dangerous posting for security personnel.

On Thursday Aneroot’s team joined military rangers in responding to a roadside bombing and were caught in a second blast triggered by suspected insurgents.

Aneroot and ranger Lance Corporal Thanes Phuttho were killed. More than a dozen officers were injured.