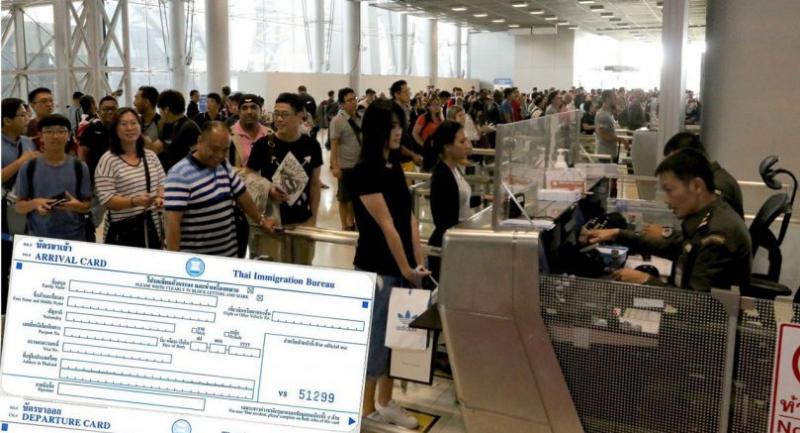 Immigration police and Airports of Thailand have expressed confidence that with Thai travellers no longer required to fill in immigration cards, known as TM6, the problem of crowding and long queues at airports will soon be solved.

The move to scrap the TM6 forms for Thais, combined with providing additional space for immigration counters, are expected to enable officials to provide more efficient services to passengers.

Immigration Police Commissioner Pol Lt-General Nathathorn Prousoontorn said the use of the TM6 forms for Thais travelling through checkpoints throughout the country was cancelled at midnight on Friday following the PM’s order under Article 44.

“Thai passengers will now be spared the inconvenience of waiting in long queues after submitting the form to immigration officials,” he said.

There will also be a decrease in crowds in immigration areas, he added.

At present, the Immigration Bureau’s technologies and database have been developed enough to allow the linking of the passport database of the Foreign Ministry and the Interior Ministry as well as the database of arrest warrants of the Police Department.

“Therefore, the form is no longer required,” Nathathorn said.

Referring to foreign passengers, he added that the immigration card for them will be adjusted and a new, simpler form will be introduced on December 31.

In a bid to solve the problem of crowding and long queues at Don Mueang International Airport, the commissioner said the number of immigration counters will be increased from 21 to 35 and four more automated gates would be opened.

Automated gates at Suvarnabhumi Airport are being made available to Thai and Singapore nationals. In the near future, visitors from Hong Kong will also be allowed to enjoy the service while those at Don Mueang Airport will serve only Thais.

More space will be added to the waiting areas, from 1,100 square metres to 1,710 square metres, Nathathorn said, adding more officials will be deployed at Don Mueang Airport to facilitate the smooth flow of passengers.