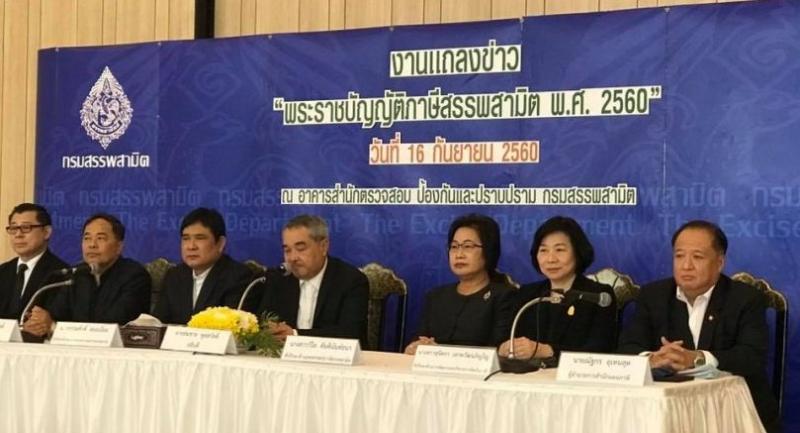 He told the press conference that new taxes rates effective immediately would not increase the price of many items, and that some items would be taxed less.

He said producers may absorb rising costs for products facing high market competition, but in any case consumers would not pay much more for these products.

The new excise system is based on retail price, while the previous system was based on ex-factory or CIF (cost, insurance and freight) prices

The details are as following:

The tax per bottle of wine priced more than Bt1,000 will be Bt110 upwards, depending on the price. The tax on locally made wine will decrease by Bt25 per bottle.

The tax per can of beer will be Bt0.50 higher, and for bottles of beer it will be Bt2 .66 more. For higher-priced beer, the tax will decrease by between Bt0.99 and Bt2.

The tax on other imported spirits, such as Johnnie Walker Red and Blue Label Scotch whisky, will be a little less, from Bt3 to Bt26 depending on alcohol content.

For cheap cigarette brands, the tax will add Bt4 to Bt15 more per pack, while higher-priced cigarettes will be taxed at Bt2-10 more per pack.

Sugary drinks also be subject to higher taxes. Soft drink taxes will be Bt0.13 to Bt 0.50 per bottle, but sugar-free soft-drink will be taxed less by Bt0.28 Bt0.36 per bottle.

Energy drinks will be taxed more, ranging from Bt0.32 to Bt0.90 per can or bottle.