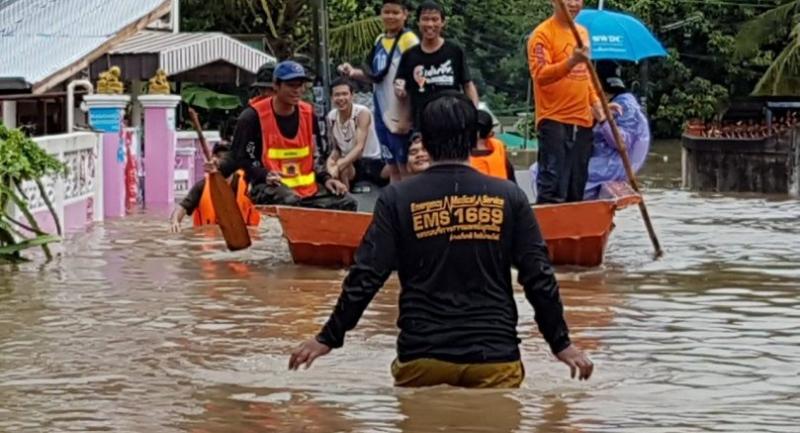 Villages are engulfed by a deluge of water as deep as 30 to 50 centimetres after a flash flood struck Phrae province yesterday, following a torrential downpour on Friday night. Officials were sent into the affected areas to provide aid.

TROPICAL storm Doksuri has weakened into a depression and unleashed heavy downpours in several North-eastern and Northern provinces on Friday night, resulting in floods in many provinces yesterday morning.

Other provinces were making preparations yesterday in expectation of more rain.

The Thai Meteorological Depart-ment reported that Doksuri was downgraded from a typhoon to a tropical storm when it swept through Vietnam on Friday. It reached Vien-tiane in Laos early yesterday and was downgraded to a depression when it reached Nan at 10am yesterday.

Chaiyaphum, Loei, Phitchit, Phitsanulok, Nakhon Phanom and Kalasin were among provinces hit by heavy rains because of the influence of Doksuri.

Heavy overnight downpours triggered by Doksuri caused the run-off from the Phu Lanka mountains in Tad Tone Waterfall National Park. The deluge hit three villages in Tambon Nafai of Chaiyaphum’s Muang district in the morning. In Moo 3 village, over 100 houses were inundated.

The floodwater also inundated the Chaiyaphum-Tad Tone road at kilometre marker 12 for about one kilometre, with the water levels ranging from 30 centimetres to one metre. Police and district officials had to block the flooded section and divert traffic to an alternative road.

In Phichit’s Muang district, several roads in were inundated on Saturday morning following a heavy overnight downpour unleashed by the tropical storm. The rain started at about 7pm on Friday and continued until morning.

Several roads in Phichit downtown and outer areas were flooded, with water levels ranging from 20 to 30cm.

Floods also hit the Phichit Agricultural Office and the Phichit Non-Formal Education Office in Tambon Klong Kachen. At the education office, the water was about 70cm high, causing damage to official vehicles parked there. Phichit governor Weerasak Wichitsaengsi directed operations to help residents in the downtown area, where water pumps were installed to drain floodwaters.

Several roads in Phitsanulok’s downtown were inundated after heavy downpours in the province’s Muang district from 1am to 6am yesterday. Officials said Uthong, Wisutthi Kasat and Phra Ong Dam roads were under 30 to 40cm of water.

And the Ban Nam Pad School in Phitsanulok’s Noen Maprang district was hit by flash flooding for the ninth time this year early yesterday.