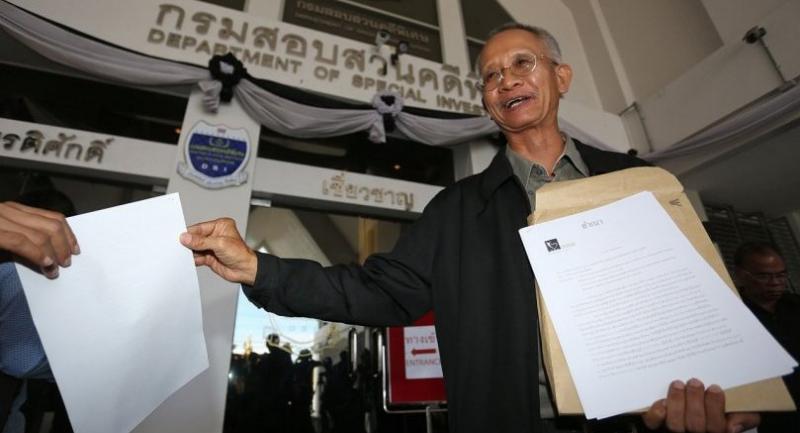 AN ANTI-GRAFT network has petitioned the Department of Special Investigation (DSI) to take legal action against everyone involved in money-laundering cases in connection with the state-owned Krungthai Bank’s multi-billion-baht fraudulent loans, in which Panthongtae Shinawatra is a high-profile suspect.

The Anti-Money Laundering Organisation (AMLO) yesterday also postponed witness statements in the case against Panthongtae, the son of ex-premier Thaksin Shinawatra, who has been accused of receiving a Bt10-million cheque from the Krisada Mahanakorn Group in connection with the Bt9.9-billion loans.

Veera Somkwamkid, secretary-general of the Anti-Corruption People’s Network, said authorities had to treat all suspects equally as there were more than 200 persons and organisations who had allegedly received ill-gotten money from the Krisada Mahanakorn Group in 2003 while Thaksin was prime minister.

Veera told the DSI that the agency’s legal actions against people charged with violating anti-money laundering laws had been discriminatory, as only some suspects had faced charges.

He also said only three of five former top executives and directors of Krungthai Bank had been punished, while the other two had been spared.

All recipients of ill-gotten funds must face legal action, including about 200 people and organisations involved in alleged wrongdoing, Veera said.

Based on a Supreme Court verdict, Krungthai Bank was found to have granted the Bt9.9-billion fraudulent loans to Golden Technology Industrial Park Co, a subsidiary of Krisada Mahanakorn Group, based on highly inflated collateral, resulting in financial damage to the bank.

Some of the fraudulent loans, totalling more than Bt3.5 billion, were then extended to various people and organisations, including an unspecified donation to the Rutthaburut Foundation.

Pol Major Woranun Sri-lum, deputy DSI spokesman, said the agency had already filed charges against 13 people and organisations in connection with the fraud, while AMLO lodged a complaint against Panthongtae in December 2016.

AMLO earlier had been told to provide more evidence against Panthongtae and three other people based on accusations they had received and hidden ill-gotten wealth in violation of the anti-money laundering law.

Meanwhile, the agency was supposed to send a representative to provide a statement to the DSI regarding Panthongtae’s case yesterday, but an unspecified “misunderstanding” delayed AMLO’s statement, which will be required at a later date so that the DSI can proceed with the prosecution.

Panthongtae earlier stated in a Facebook post that he was the subject of a witch hunt, arguing that many people and organisations had received money from the real estate group, not all of whom were facing prosecution.

The ex-premier’s son said the fund was supposed to be part of a joint business deal with a top executive from the real estate group.