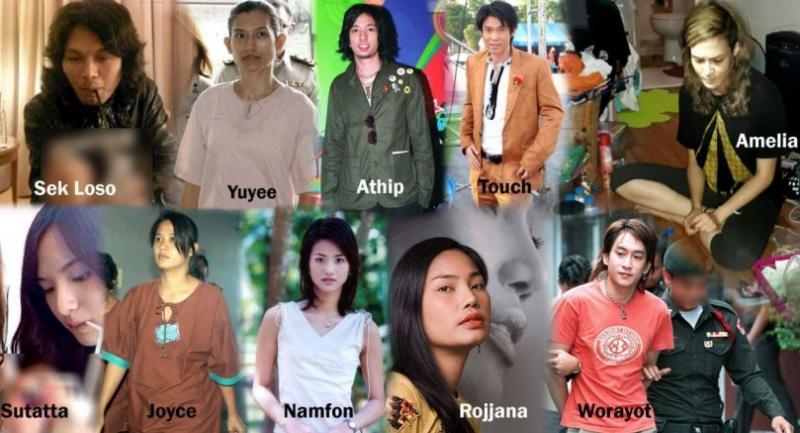 FORMER MISS TEEN THAILAND and now-disgraced actress Amelia Jacobs, who was arrested on drug-related charges early on Tuesday morning, is not the first – and will not be the last – Thai star who has seen a bright future threatened by involvement with illegal drugs. Indeed, the police blotter is littered with examples of celebrities being caught with narcotics, ending in lengthy jail sentences and hefty fines, although in some cases, canny public relations and efforts to rehabilitate have saved careers that seemed beyond repair.

Just this last March, the Supreme Court upheld a verdict against Chatchaya Ramos, or “Yuyee”, formerly a popular model, sentencing her to 15 years and three months in jail for smuggling cocaine into the country in November 2012. During a search at Don Mueang International Airport, authorities found 251 milligrams of cocaine concealed in her suitcase. In addition to the jail sentence, she was also fined Bt1.5 million.

However, the trail of careers in peril reaches back years. In 2013, the young actress Sutatta “Punpun” Udomsilp saw all of her contracts suspended after photos of her using meth were leaked to the public and her family admitted that she used drugs. However, the young celebrity stopped using drugs before returning to act in movies again and regaining her popularity as a teen idol.

In another particularly high-profile case in December 2011, renowned rockstar Seksan “Sek Loso” Sukpimai came out to admit that he used “ice” after his estranged wife at the time, Wiphakorn Sookpimay, posted on Facebook photos of him consuming drugs.

He too was able to restore his image after spending months in rehabilitation and then returning to the music arena where he has founded and managed many related businesses. He also divorced Wiphakorn.

In March the previous year, the once-rising star Athip Nana, or “Ball”, was arrested after police found him in possession of marijuana and cocaine. He was sentenced to one year and three months in jail, fined Bt12,000 and ordered to enter rehab. However, his sentence was suspended for two years.

In the same year, a female comedian known as Nok Choenyim was arrested for trying to smuggle 560 milligrams of “ice”, 580 milligrams of marijuana and drug paraphernalia from Cambodia to Thailand. It was the second time she was charged for such an offence.

Going all the way back to 2004, the popular young singer Joyce Triumph Kingdoms and her boyfriend were arrested and charged with possession of 4,000 “yaba” amphetamine tablets with intent to sell. She was sentenced to eight years and one month in jail and only freed in 2013 after serving the sentence.

In May the same year, Worayot Boontongtum, known also as “Pat Powerpat”, was a rising star when he was arrested in possession of 3,000 ecstasy tablets, four bottles of ketamine and a bag of marijuana. He was found guilty of having drugs for personal use and with intent to sell and sentenced to 42 years in jail.

Not all of the collapsing careers were directly linked to an arrest. In 2002, the life of the former supermodel Rojjana “Yui” Phetkanha, who had represented Thailand on the international catwalk, turned upside down as she reportedly became addicted to drugs, resulting in her losing her job and an income estimated to be about Bt50 million a year.

In 1997, two Thai stars were separately apprehended for being involved in narcotics. Actress Namfon Kullanut failed a urine test, but her tearful explanation that a friend had put ecstasy into her drink, which she had not consumed willingly, resulted in a court dismissing her case.

She took a break from work but eventually returned to join the ranks of popular stars.

With no shortage of examples of celebrities caught in a scandal, Amelia now faces not only a lengthy judicial process but also the court of public opinion. Both verdicts will decide whether drugs have ruined another celebrity career.