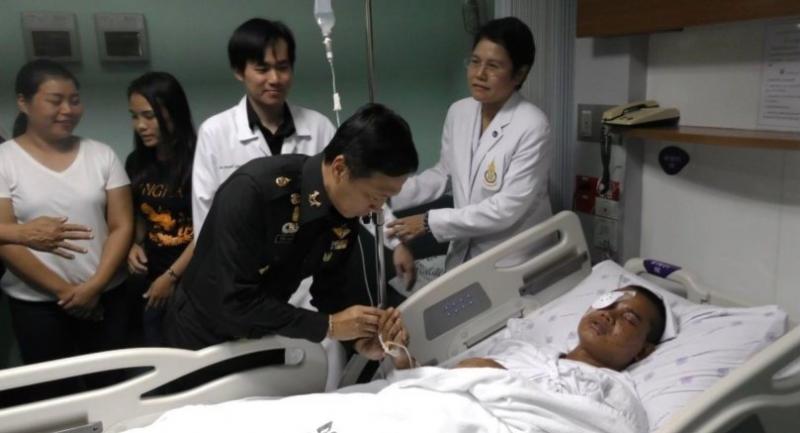 SECURITY OFFICIALS are hunting a man on the run after he was allegedly involved in an attack in Pattani’s Sai Buri district that killed four soldiers and injured several others on Friday.

Lt-General Piyawat Nakwanich, the commander of the Fourth Army Region that overseas military affairs in the South, said yesterday that two suspects who worked as construction workers had already been detained over the attack.

Piyawat did not reveal the identity of the third suspect but said the authorities had forensic evidence from the scene that could link the person to the attack.

The powerful bomb, believed to have contained between 80 and 100 kilograms of explosives, went off and ripped apart their pickup truck as the soldiers were patrolling Joh Keu Yae-Sai Buri Road in Tambon Taping. The explosives were hidden in water drainage pipes at a construction site, so workers there were questioned for possible involvement.

Piywat was speaking after visiting Songkhlanagarind Hospital in Songkhla province and speaking to volunteer ranger Thanya Ueafapraiwan, who received an injury to his right eye during the attack.

The general gave Thanya items that were granted by His Majesty King Maha Vajiralongkorn.

The Fourth Army Region commander has asked the public to cooperate and help security authorities in preventing further violence in the South. People should not believe those who tried to divide the society by claiming that they were second-grade citizens, he said.