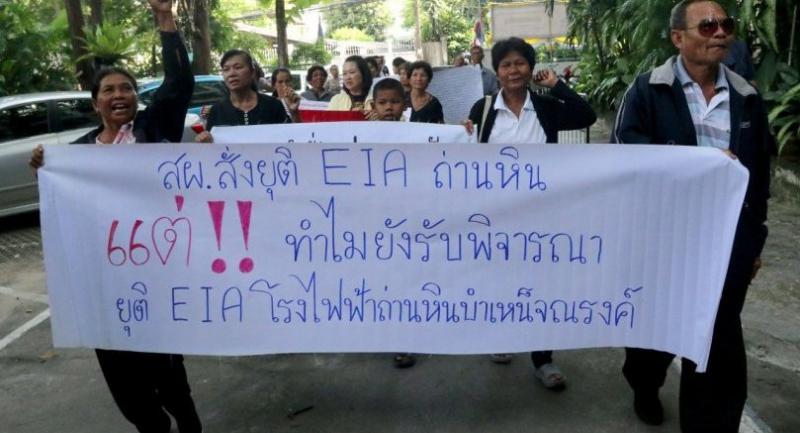 A lawsuit has been filed at the Administrative Court to stop construction of a coal-fired power plant and a biomass power plant in Chaiyaphum’s Bamnet Narong district.

Over 500 people from Bamnet Narong district gathered at Nakhon Ratchasima Provincial Administrative Court on Monday requesting the court cancel the approval process for a coal-fired or biomass power plant to be located in a potash mine in their area.

The residents made a public statement that multiple flaws in the Environmental Impact Assessment (EIA) for the project has led them to take legal action. They cited an inadequate public participation process, an unlawful approval process permitting use of the local water supply, and failure of the EIA report to meet the standards of the Office of Natural Resources and Environmental Policy and Planning.

Protestor Mung Meechamnan said that more than 3,000 people in three tambon of Bamnet Narong district would suffer direct impacts from the power plant. Local community efforts to seek intervention by relevant agencies to stop the project have all failed, he said, and so their last hope is the Administrative Court.

“We would like the Administrative Court to order the revocation of all EIA reports of the power plant project and the permission [granted] to use the local water supply, and stop the consideration of this project,” Mung said.

“Nobody wants the coal-fired power plant, and biomass power plant, in our neighbourhood, because we have seen that every place with such a project suffers from pollution.” The power plant projects are proposed for a potash and rock-salt mining location owned by ASEAN Potash Chaiyaphum Co. The EIA report was done by Team Consultant Engineering and Management Ltd.

Coal was originally proposed to fuel the 50-megawatt power plant. The proposal later changed the planned fuel to palm kernel shells due to protests anti-coal protests from the local community. Electricity from the plant is intended for use in the company’s mining operation.