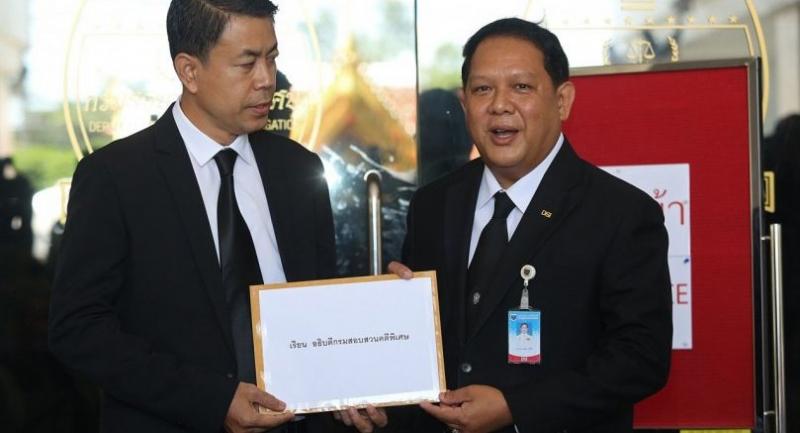 The lawyer for Panthongtae Shinawatra, son of ex-premier Thaksin Shinawatra, on Thursday renewed his call for the Department of Special Investigation to drop a money-laundering probe against his client by citing the name of Meechai Ruchuphan.

Lawyer Choomsai Sriyaphai, said that if the DSI continued the anti-money laundering probe against Panthongtae related to fraudulent loans from the state-owned Krungthai Bank, the DSI should also take action against Meechai, now chairman of the Constitution Drafting Commission.

In his appeal against the probe, Choomsai said that Meechai was chairman of Krisada Mahanakorn Group, including some of the time that it received Bt9.9 billon in fraudulent loans for the 20 years between 1992 and 2012. In contrast, he said, Panthongtae was just an “outsider”. The lawyer asked how, if Meechai had learned nothing about the fraudulent loans, outsider Panthongtae could know that the money was illegal. The charge that Panthongtae attempted to help the management of Krisada Mahanakorn launder the illegally obtained money was invalid, said Choomsai.

In the middle of September, the Anti-Money Laundering Office submitted a complaint with the DSI, accusing Panthongtae of getting involved in laundering of the fraudulent loans granted from Krungthai Bank to Golden Technology Industrial Park Co, a subsidiary of Krisada Mahanakorn Group.

Based on a Supreme Court verdict, Krungthai Bank was found to have granted the Bt9.9-billion fraudulent loans to Golden Technology based on highly inflated collateral, resulting in financial damage to the bank. Some of the fraudulent loans, totalling more than Bt3.5 billion, were then extended to various people and organisations, including an unspecified donation to the Rutthaburut Foundation.

The AMLO said Panthongtae faced the charge because he allegedly received a Bt10-million cheque from Wichai Krisadathanont of the real estate firm Krisada Mahanakorn Group.

Chumsai noted that Meechai has never faced any charges although he was the chairman of the Krisada Mahanakhon board for 20 years.

Chumsai said Panthongtae had no intention to conceal the money and the lawyer reiterated that over 150 others had received the money from the group in a manner similar to Thaksin’s son but none faced charges.

Chumsai added that Wichai was known to be a wealthy land developer, so Panthongtae had no reason to suspect that the money from him had been unlawfully gotten, and he thought Wichai really wanted to invest in Panthongtae’s business at that time.

The lawyer added that his client had returned the money to Wichai after he found the money did not meet the investment criteria.

Chumsai noted that the Bt10 million was only 0.1 per cent of the Bt9.9 billion in loans. Had Panthongtae intended to help the group launder the money, the money would have to be transferred to him 1,000 times, the lawyer noted.

“All of these pointed out that it was not justified to raise money-laundering charge against my client so I request the DSI to consider this point for the sake of fairness,” the lawyer said.

Pol Major Woranan Srilam, director of the special cases division, who received the appeal from Chumsai, said the appeal was similar to earlier requests from Panthongtae’s side with no new points.

He said he would in any case submit the appeal to DSI chief Pol Colonel Paisit Wongmuang to pass on to the investigators of the case for consideration, along with evidence and other information.