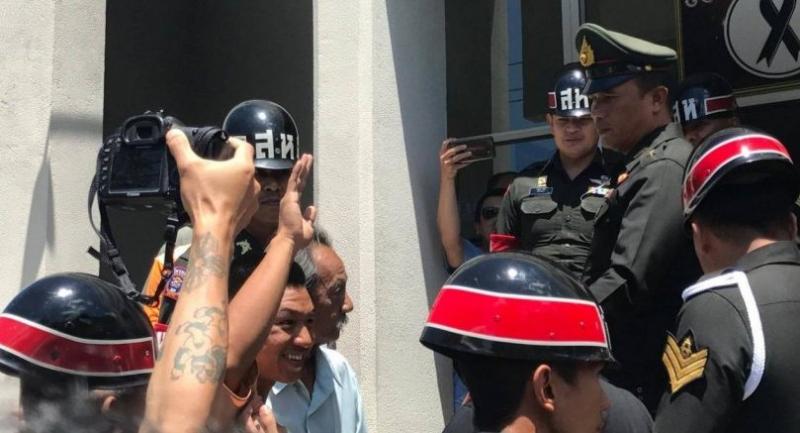 The Khon Kaen military Court on Friday set November 20 as the new date to hear testimony from two witnesses for the plaintiff against student activist Jatupat Boonpattararaksa, who was charged with violating the junta’s political-gathering ban in Khon Kaen two years ago.

Jatupat was already sentenced in mid-August to two years and six months in prison for a lese majeste charge resulting from his sharing a BBC report profiling the monarch. He was found guilty and initially sentenced to five years for the charge, but the term was reduced because he confessed, according to the court judgment

The student activist was arrested for that charge in December after sharing the BBC Thai report on Facebook. His bail requests were consistently rejected as authorities regarded lese majeste as a serious charge, possibly entailing severe punishment amid calles from international human rights organisations for Jatupat to be released.

Prior to the court judgment, Jatupat, who had maintained his innocence for months, agreed to plead guilty after consulting with his family and legal team to get a more lenient sentence.

The court on Friday, in addition, allowed the defendant’s legal team to appeal against the prosecutor’s proposal to apply Jatupat’s penalty in the political gathering case consecutively, adding it to the lese majeste sentence.

Anon Nampa, a member of Thai Lawyers for Human Rights who has helped Jatupat in the cases, said the delay in the testimonies could prolong his client’s penalty terms. He hoped that the court would see that Jatupat’s act was peaceful and did not trigger any disturbance.

Jatupat reportedly sang a song and carried a banner on the topic of opposing the coup on May 22, 2015, the one-year coup anniversary.

Anon said the legal team would wait and see whether the court rules against Jatupat in the case and how the penalty would be applied before considering an appeal.

The court has set the new witness testimony date for November 20.