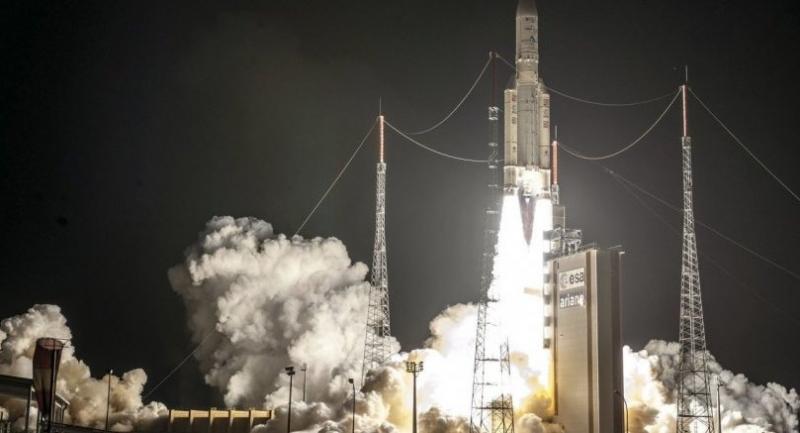 A handout photo made available on 30 September 2017 by Arianespace shows the lift off of flight VA239, Ariane 5 ECA from Guiana Space Center Europe's Spaceport in Kourou, French Guiana, 29 September 2017. /EPA

The rocket launched successfully from the Kourou Space Centre in French Guiana on Friday, carrying the Intelsat 37e and the BSAT-4a satellites into space, Arianespace said.

The launch had initially been set for September 5 but was aborted in the final countdown as the main engine was being ignited for lift-off due to an "anomaly on the launcher," Arianespace said.

The last time an Ariane 5 lift-off was aborted at ignition was in March 2011.

Friday's launch was the fifth Ariane 5 rocket mission this year, and the ninth successful launch by Arianespace.

It saw the Intelsat 37e, which weighs around 6.5 tonnes, separating from the rocket just under 30 minutes after liftoff.

And the BSAT-4a satellite, which weighs around 3.5 tonnes, was placed in orbit a little more than 47 minutes after taking off from the French overseas territory in South America.

Intelsat 37e is a high-speed satellite built by Boeing that will offer high-performance telecoms services while BSAT-4a is a satellite for Japan's Broadcasting Satellite System Corp.

Kourou is Europe's spaceport in South America and Arianespace is a launch operator which puts satellites into orbit for the European Commission and European Space Agency.

Guiana, which is home to some 250,000 people, has been administered as a French region since the end of the 18th century.