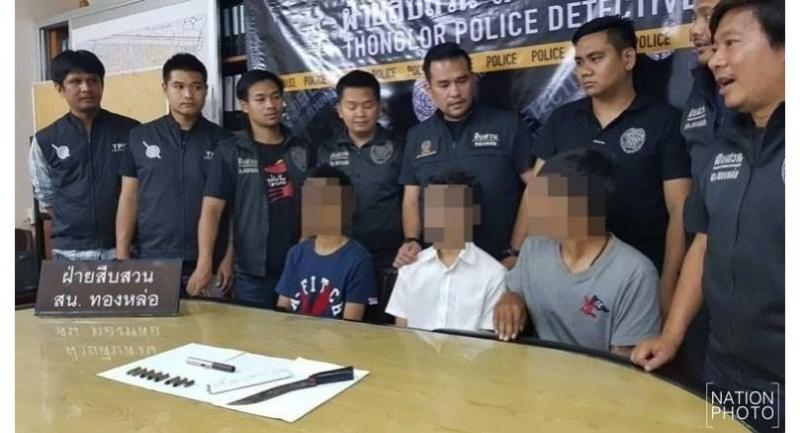 Three Bangkok technical college students were arrested over the robbery of an iPhone 7 Plus at gun- and knife-point in the Sukhumvit area on September 27, Thong Lor superintendent Pol Colonel Khajornpong Jitpakphum said on Sunday.

Suspect Hassakorn Kobchainarong, 22, was nabbed at 1am on Sunday while Sukree Oum-ngam-art, 21, was arrested on Saturday evening. Another suspect, whose name was withheld because he is under 18, was also brought into custody.

Police said they seized from them a pistol, eight bullets and a sharp eight-inch knife.

Police believe the gang has mugged at least another two or three victims in the area, although only Sukree has confessed to stealing the phone because he was high on drugs.

The victim filed a complaint to Thong Lor police on September 27, saying that he was assaulted and robbed at 3am by a gang using three motorcycles while he was walking alone in Soi Sukhumvit 33.

A description of the three suspects led to the students' arrests, police said.

Hassakorn admitted that the gun used in the crime was his, adding that a senior student had given it to him for self protection years ago. He said he was at the robbery scene at the time, but he denied robbing the man. He claimed to be just a bystander who witnessed Sukree assault the victim.

Sukree admitted that he used the knife he carried for self protection to rob the victim while being under the influence of a drug. The third suspect claimed that he was merely riding a motorcycle along with the group.