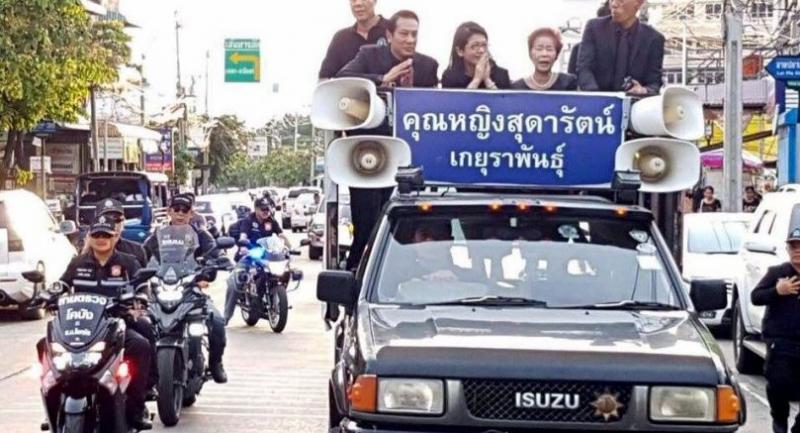 Khunying Sudarat Keyuraphan on a pickup truck equipped with a banner of her name during a marigold-|planting activity in tribute to the late King.

PHEU THAI PARTY key figure and former minister Sudarat Keyuraphan yesterday defended herself against claims that she used a marigold-planting activity in tribute to His Majesty the late King Bhumibol Adulyadej as a political tool to boost her own popularity.

With teary eyes, Sudarat said with shaken voice: “It’s true that I used to be a politician but should it stop my intention to express loyalty to the late King, like other people do? Our activity is so minor compared with what the King had done for us for many years.”

The veteran politician spoke after photos were circulated online of her riding a pickup truck equipped with speakers and a banner with her name, similar to a political campaigning truck, in a car parade during the activity organised by the local community of Lat Pla Khao region in Bangkok.

Sudarat’s truck was accompanied by several motorcycles, whose riders were wearing uniforms, and the parade was led by a police car.

The photos sparked controversy among social media users, who accused Sudarat of using the condolence period for her own benefit and using security protection like a serving officer. Some even called on the ruling junta to prolong its ban on political activities.

In a press briefing yesterday, Sudarat explained that she had not known the truck she rode would be highlighted with her name, because she got on it from behind.

“It has been used for 10 years, mainly for my foundation’s activity. I thought it was already retired,” she said. “It was my fault. I got on three cars that day and didn’t have a thorough look at all of them.”

Other banners did not include her name on them, and Sudarat claimed that this proved that she did not wish to popularise herself through the activity.

Motorcycle riders surrounding her truck were civil defence volunteers who came to help with managing the flow of thousands of people attending the event on the day, explained Den Kanbutr, an organising committee member.

Given the large scale of the activity along Lat Pla Khao road, police volunteered themselves to manage traffic in the area and did not provide a special guard for Sudarat, Den said.

Deputy Prime Minister and Defence Minister Gen Prawit Wongsuwan said he plans to have some officers talk to Sudarat about appropriateness regarding what he saw as “self promotion”. The Pheu Thai figure said that she would be fine with this and would explain things factually.

However, she refused to comment on whether the junta would consider the controversy as a reason to prolong the political ban. “I wouldn’t know how they think,” she said.

Meanwhile, Bang Khen district director Wanida Chiangpaisalkul said that the district authority was invited to join the event on Sunday, when the controversy happened, but did not attend.

The authority partially coordinated with the organising committee, which came from the private sector, merely by asking shop owners to decorate their premises with marigolds, Wanida added.