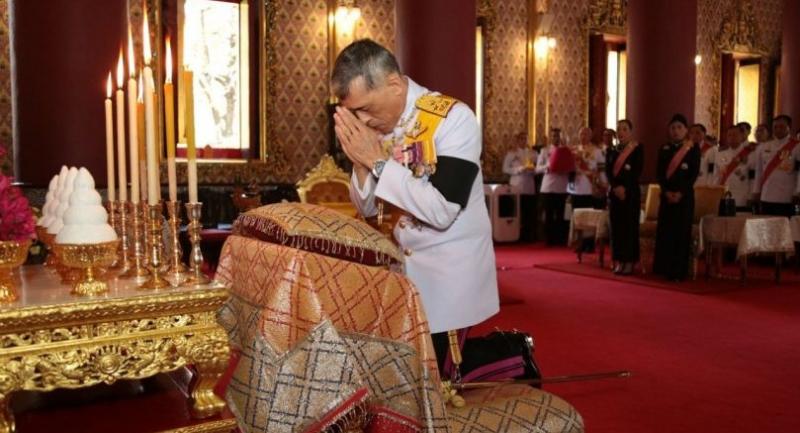 HM King Maha Vajiralongkorn will tomorrow install the grand nine-tiered umbrella at the top of the elaborate Royal Crematorium for his late father.

The late monarch reigned over Thailand for seven full decades with total devotion to his people.

Thais across the world regard the upcoming Royal Cremation Ceremonies as very important events. The ceremonies will run from October 25 to 29, with the actual cremation to take place on October 26.

PM’s Office Minister Omsin Chiwaphruek said yesterday that the ceremonies would be broadcast live via the Television Pool of Thailand.

“The signal will be beamed to all TV stations in Thailand, including the English-language stations such as NBT World and Thai TV Global Network,” he said.

He added that the live broadcast would be sent to 177 countries across the world.

“People can also watch the royal ceremonies via www.kingrama9.th and https://www.facebook.com/informationcenter.for.kingrama9/,” he said.

Deputy Prime Minister Tanasak Patimapragorn assured the public that any heavy downpours would not affect the Royal Ceremonies.

“We have made preparations,” he said. “We have co-ordinated with the Bangkok Metropolitan Administration (BMA) to ensure all water-drainage pipes are well dredged to facilitate the flow of water.”

He added that flowers were well prepared to ensure they would be in full bloom to coincide with the scheduled ceremonies. The flowers, as well as rice planted within the Royal Crematorium’s compound, would last until the end of November.

“Between November 2 and 30, we will let people come into the area to see an exhibition on the Royal Cremation Ceremonies,” Tanasak said.

He said both Thais and foreigners would be welcome to the exhibition.

Tanasak said that rehearsals had already been held for the royal processions in honour of the late King during the Royal Cremation Ceremonies.

“The rehearsals on October 15 were great, but we will make them [the processions] even better,” he said.

HRH Princess Maha Chakri Sirindhorn, who participated in the royal-procession rehearsal on Sunday, has suggested adjustments to the music to be played in the processions, PM’s Office permanent secretary Patcharaporn Inseeyong revealed yesterday. The Princess said the sound of the bass drum should take the lead in songs played during the procession, as those who walked near the end of the third procession could not hear the rhythm.

The Princess gave the suggestion to Prime Minister Prayut Chan-o-cha after attending the Sunday rehearsal of the four processions at the Royal Crematorium field at Sanam Luang.

Patcharaporn said that Princess Sirindhorn had noted that, during the second procession, the sound of the bass drum was not clear as it overlapped with the sound of the traditional Thai pipat band and other sounds. At that stage, the beat could still be heard. However, when the rehearsal came to the third procession, and a song called Bua Loi was played, those who walked near the end of the line could hardly hear the bass drum.

The permanent secretary said the Supreme Commander was assigned to take care of the issue and the next rehearsal on October 21 is expected to see the situation resolved so that the rehearsal, the last, will be “more perfect”.

Patcharaporn said that the rehearsal on Sunday proceeded smoothly and people attending were all appropriately dressed in black.