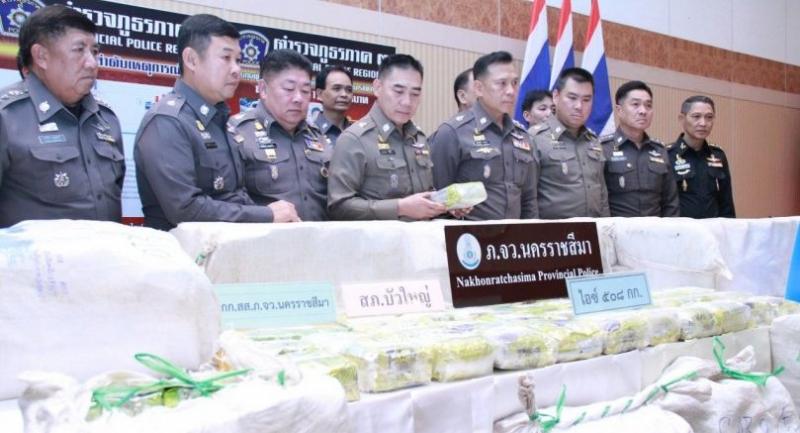 A 30-year-old Nakhon Phanom man has been arrested in Nakhon Ratchasima in possession of 508 kilograms of crystal methamphetamine or “ice”, with a reported street value of Bt1 billion, national police chief Pol General Chakthip Chaijinda said on Tuesday.

Thinnakorn Khomsing was spotted walking suspiciously with another man near a temple in Bua Yai district, where they had ditched the pick-up truck that police were seeking after it was reported to have fled a police checkpoint earlier in the morning.

Police arrested Thinnakorn near the local train station but his accomplice, identified only by nickname Bee, escaped. The drugs were retrieved from the abandoned truck. Thinnakorn told police he had been paid just Bt20,000 to take the drugs to an unknown location. The man who had hired him had orddered him to drive from one place to another and then receive further instructions, he said.

Deputy police commissioner Pol General Chalermkiat Srivorakarn said drugs had traditionally been smuggled in the North but this changed after police had increased their interception of drug smugglers in that region.

Gangs had now started using the Northeast as their main smuggling routes for transporting drugs to southern Thailand and Malaysia.

The drugs are then distributed to other destinations, including Australia and Taiwan, where such a large quantity of “ice” could be worth even more than the estimated Bt1 billion, Chalermkiat said.