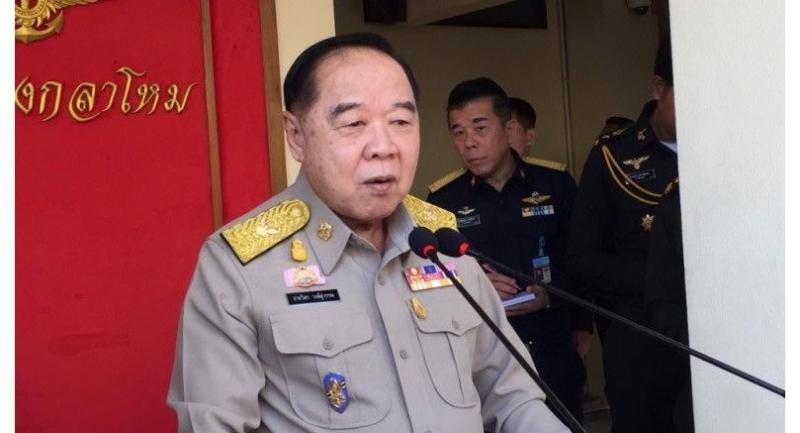 Deputy Prime Minister Prawit Wongsuwan said on Tuesday that he had sent officers to “talk” with Pheu Thai Party key figure Sudarat Keyuraphan, in order for her to understand the appropriateness of her apparent political activity this past weekend.

The deputy PM said he had no idea why Sudarat had said during a press briefing that she did not see a banner bearing her name on a vehicle in which she had ridden on Sunday, as it was obvious that the banner was big enough for anyone to notice.

Sudarat on Monday defended herself against claims that she had used a marigold-planting activity in tribute to His Majesty the late King Bhumibol Adulyadej as a political tool to boost her own popularity.

She was seen in photos circulated online riding in a pickup truck equipped with speakers and a banner bearing her name – a combination similar to a political-campaign truck – in a vehicle parade during an activity organised on Sunday by the Lat Pla Khao community in Bangkok.

Sudarat’s truck was accompanied by several motorcycles, whose riders were wearing uniforms, and the parade was led by a police car.

The photos sparked controversy among social-media users, who accused Sudarat of using the condolence period for the late King for her own benefit, and of using a security detail like a serving officer.

In a press briefing on Monday, Sudarat explained that she had not known that the truck she had ridden in was highlighted with her name, because she had got into it from behind.

“You have understood when listening to the story she told you? The fact is that the banner bearing her name was big enough [for her to see it], though,” Prawit said.

While the deputy premier made no mention of the potential lifting of the long-standing ban on political activity, he insisted that in regard to the coming election, the government was still sticking to its roadmap.

The prime minister’s recent announcement on the election date was clear and should not be affected by any impasses, he said, alluding to the latest observations about a potential delay in the promulgation of some organic laws as a result of interpretations on their constitutionality.

Certain political observers fear that some people might petition the Constitutional Court to rule on the laws’ constitutionality, which would draw out the election process.

Four organic laws are essential for the holding of the general election.

The first two – the Election Commission and political-party laws – have been promulgated, while those concerning the election of MPs and the selection of the Senate are in the drafting and deliberation process.