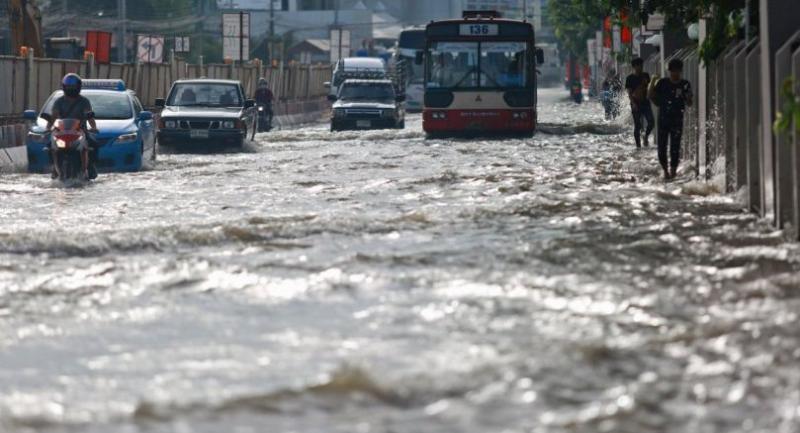 BANGKOK will not be safe from the severe impact of major storms unless there is a huge improvement in the capital’s drainage system and canal network, academics have warned as more heavy rain is predicted for the capital.

A group of academics on water management, disaster prevention and city planning said at a public seminar at Chulalongkorn University yesterday that Bangkok’s drainage system was old, poorly maintained and unable to drain the water adequately, which increases the risk of Bangkok being severely flooded if another storm hits.

Thailand Global Warming Academy director Thanawat Charupongsakul said that Bangkok lacked the preparedness to cope with a storm. The widespread flooding in 55 areas of the city last Saturday showed that Bangkok could not withstand even a portion of the deluge and it took a day to drain the floodwater.

“It is not frequent for Bangkok to be directly hit by tropical storm, but the city is situated on the storm route and was hit directly several times in the past, such as in 1952 and 1983,” Thanawat said. He said that the precipitation within a six-hour period on Saturday night exceeded 214 millimetres and broke a 10-year record.

If the rain was measured per hour, it was only 40 millimetres, which was within Bangkok’s drainage capacity, but it still flooded and showed the inability of the system to handle the volume, he said.

He warned that Bangkok will suffer badly from flooding if a storm hits the city directly with up to 300 millimetres of rain per hour.

“Bangkok’s sewage system is already more than 30 years old. It is suffering from a lack of maintenance, land sinking problems, and garbage and sediment clogging, which greatly reduce the drainage capacity,” Thanawat said.

He also pointed out that the lack of separation between sewage from households and rainwater drainage also hinders drainage, because more than 10 million citizens in Bangkok release around 6 million cubic metres of wastewater into the system every day.

Terdkiat Sakkhamduang , the former chairman of Thai Urban Designers Association, suggested that Bangkok’s drainage system has to be entirely improved and the city plan also has to be revised.

“We have learned a lesson from the flaws in Bangkok’s city plan that prioritise too much in replacing canals with expanding the road network. We should learn from our past and restore the canals, as the canal network can drain water far better than the sewage system,” Terdkiat said.

Bangkok governor Pol General Aswin Kwanmuang warned yesterday that Bangkok would face more heavy rains overnight, which may be as severe as the downpour last Saturday. He said Bangkok Metropolitan Administration (BMA) had prepared for the downpour by getting the water pumps ready and lowering the water level in the canals. Interior Minister General Anupong Paochinda also affirmed that Bangkok residents should not be worried over the potential danger of flooding from northern run-offs, as the Royal Irrigation Department was in control of water in dams and 12 water-retention fields in upstream areas could absorb floodwater before it reached the capital.

Chai Nat’s Chao Phraya Dam was currently receiving about 2,500 cubic metres of water per second, which was in balance with the level it released, he said.