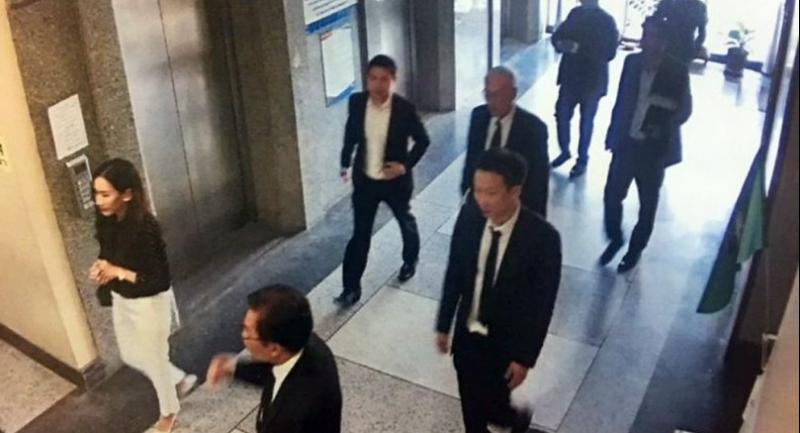 CCTV footage from the Department of Special Investigation (DSI) shows Panthongtae Shinawatra reporting on Tuesday after being charged for alleged money laundering and summoned by the department. He is accompanied by three men and his younger sister.

PANTHONGTAE SHINAWATRA, the son of fugitive former prime minister Thaksin Shinawatra, and three other persons who are facing money-laundering and related charges filed by the Department of Special Investigation (DSI), have denied any wrongdoing and will fight their cases in court.

Pol Colonel Paisit Wongmuang, the DSI director-general, said yesterday that all four reported themselves and acknowledged the charges to the agency on Tuesday, October 17, ahead of the October 24 deadline set by authorities. They were released without bail.

He said the Anti-Money Laundering Organisation (AMLO) had previously submitted details of the charges to the DSI. They relate to alleged multi-billion-baht fraudulent loans from the state-owned Krungthai Bank, in which a Bt10-million cheque was said to be issued to Panthongtae and another Bt26-million cheque given to Kanchana and Wanchai Honghern, and Kesinee Jipiphop.

As a result, the DSI is pursuing money-laundering and related charges against the four suspects, who said they will provide evidence to defend themselves in court.

Money-laundering cases have a 15-year statute of limitations, so the DSI is required to close its investigation in this case by the middle of next year.

Panthongtae earlier petitioned the DSI to also investigate another 150 people and organisations that had allegedly received ill-gotten funds from the Krisada Mahanakorn Group, but they are not being investigated.