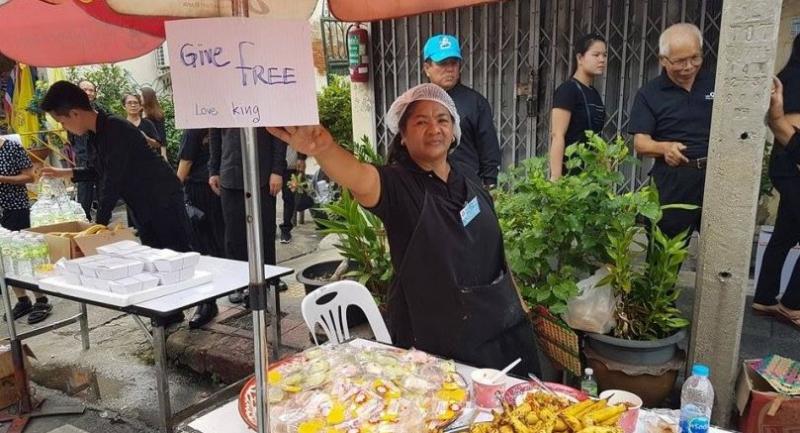 GOOD SAMARITANS returned to areas around Sanam Luang as the ceremony of the Royal Cremation began yesterday, distributing food, drinks and other essentials to loyal subjects attending the event.

Since Tuesday, the night before screening points opened for people to witness the cremation ceremony of the late King Bhumibol Adulyadej, people started to take positions around the area to offer various foodstuffs to waiting mourners.

The donors said the gifts were the least they could do for their beloved late King.

Tepdanai Wedklang, a 40-year-old architect, joined a few friends to give iced orange juice to mourners near Somdet Phra Pinklao Bridge. The spot is close to the Royal Cremation grounds with a screening point under the bridge.

Tepdanai said his group had registered with authorities days before the event and staffed the area to offer drinks to mourners since Tuesday.

“We came together and pooled our money to buy these drinks and give them away to people waiting to take part in the Royal Cremation,” he said. “It is the least we can do for this final event.”

Because of the hot weather and expected long wait, many good Samaritans were choosing to distribute chilled drinks including water, soda pop and freshly squeezed juices.

The refreshments were in addition to the food and drinks provided by the Royal Family, which were distributed in areas surrounding the Royal Cremation grounds.

Besides food and drink, members of the public were also giving out souvenirs such as postcards showing pictures of the late King and fans engraved with memorial messages.

Hundreds of registered volunteers equipped with smelling salts and water also staffed areas on Rajdamnoen Road and other streets adjacent to the mourning areas.