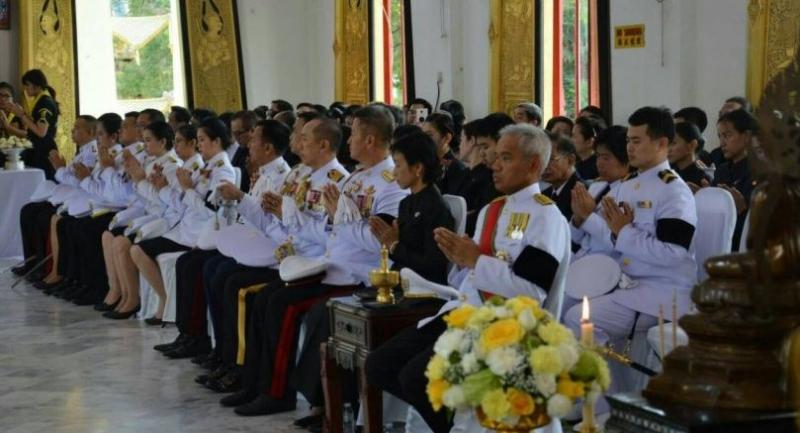 ROYAL THAI embassies and consular offices around the world yesterday hosted events to offer floral tributes to His Majesty the late King Bhumibol Adulyadej coinciding with the time of the Royal Cremation Ceremony in Thailand.

The Foreign Ministry instructed 94 missions in more than 70 countries with whom Thailand has diplomatic relations to organise ceremonies for guests, officials and Thais who live and work in those host countries.

Countries in the same or similar time zones as Thailand – GMT+7 – held the sandalwood flower-laying event at the same time as in Bangkok. In places in very different time zones, such as countries in North America, the ceremony was held as per local convenience but not before the symbolic Royal Cremation in the capital.

His Majesty King Maha Vajiralongkorn last week granted royal boxes to the 94 missions for symbolic use in their ceremonies.

While many Thai embassies held the event in their own compounds, the Thai Embassy in New Delhi held the ceremony at PSOI, Nehru Park, attended by senior Indian officials including Preeti Saran, India’s Secretary (East) of the Ministry of External Affairs. Hundreds of foreign diplomats and Thai people living in India joined the ceremony yesterday. Ambassador to India Chutintorn Gongsakdi (above) led more than 200 Thais in India in paying final tribute and farewell to the Great king. Among them, there were Thai Buddhist monks and nuns, Thai Muslim students from Aligar and Lucknow, as well as some Thai Christians and Sikhs. Some Thai students from Vanarasi in Bihar, others who work in Delhi volunteered to help with the organization of the event.

Apart from the Thai people, senior representatives from Indian Ministry of External Affairs, the ruling party BJP, and New Delhi Municipal Council also attended the event, as well as ambassadors and diplomats from Asean and other embassies.

Elsewhere in India, the Royal Thai Consulates-General in Mumbai, Chennai and Kolkata also held similar memorial service. So are the Thai temples in India. The Thai Embassy in Paris hosted a flower-placing event at Salons Vianey hall for diplomats, officials and Thais. Ambassador to France Sihasak Phuangketkeow (with glasses in the middle) led some 1,000 mourners to mark the final farewell to the late king. In Phnom Penh, Thai government officials, their families and over 500 members of the Thai community living in Phnom Penh and other provinces in Cambodia gathered at the Thai Embassy to offer sandalwood flowers in respect to the late King. The ceremony was attended by Her Royal Highness Princess Samdech Reach Botrei Preah Anoch Norodom Arunrasmy (above), diplomatic corps, and Cambodians. The ceremony was held concurrently with the Royal Cremation Ceremony in Bangkok and at other Thai embassies and consulates abroad. In Malaysia, the Thai Embassy held the religious ceremony as part of the cremation rite for HM the late King at Wat Thai Chetawan, southwest of Kuala Lumpur. The event was attended by some 1,500 Thais living in Malaysia’s capital city and nearby areas.

Wat Thai Chetawan was founded with the support of the late King and the first prime minister of Malaya Tunku Abdul Rahman as a symbol of friendship and profound cultural ties between the two countries. The late King presided over the groundbreaking ceremony for the construction of its ordination hall during his state visit to Malaya in 1962. In Yangon, more than 500 Thais who work and live in Myanmar, as well as officials and diplomats, placed sandalwood flowers at the Thai Embassy. In Ankara, Turkey, the Thai Embassy hosted a sandalwood flower-placing ceremony for officials and the Thai community to pay their respects to the late King.