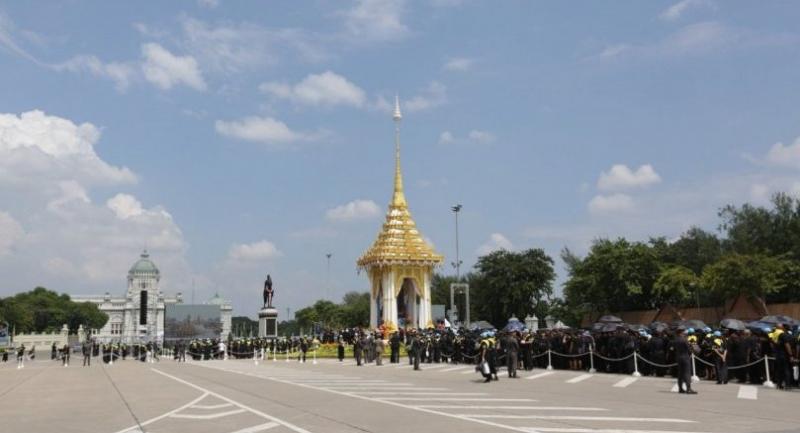 THOUSANDS OF black-clad loyal subjects gathered in front of the Royal Plaza, one of the most popular replicas of the Royal Crematorium, to pay final respects to His Majesty the late King Bhumibol Adulyadej, whose remains were cremated yesterday at Sanam Luang.

Many had waited near Sanam Luang for days before the final event. Those who could not get a place at Sanam Luang placed handcrafted sandalwood flowers in front of replicas of the Royal Cremat-orium across Thailand instead.

Those who came to the heart of Rattanakosin Island, a sacred part of Bangkok, but could not travel to Sanam Luang, visited the Royal Plaza, where the replica was placed in front of the Equestrian statue of the late King’s paternal grandfather, the late King Chulalongkorn.

The lines into the Royal Plaza proceeded at a slow pace, moving once every half an hour, and stopping to allow royal processions to pass by. The clear windows of the vehicles gave prostrating people a relatively clear view of the Royal Family members.

From a nine-year-old volunteer to an 84-year-old retiree who had travelled many kilometres, people of all generations shared one commonality – they all lived during the reign of the late King and recognised his legacy.

Nine-year-old Pimyada, a student from Pathum Thani, could not go to the central grounds of the Royal Crematorium in Sanam Luang with her family, but with her mother and aunt joined several thousand mourners paying tribute to the late King and contributing as a volunteer.

“I helped distribute food and water to waiting mourners. It is not tiring at all, as I see people uniting today as a last tribute to HM the late King. I especially like his Royal Rain project, which has helped farmers to survive drought and sustain themselves. I will also continue to do good deeds for him not just today but as long as I can,” Pimyada said.

The weather seemed to reflect people’s subdued mood as heavy rain showers occurred later in the afternoon. But the rain did little to stop determined loyal subjects from paying last tributes to their long-beloved King.

Instead, the weather occasioned even more demonstrations of people doing good deeds, with free umbrellas, food, water and basic medicine distributed to mourners by volunteers. Some were registered, wearing royally granted yellow scarves and blue caps, while other simply began spontaneously providing help.