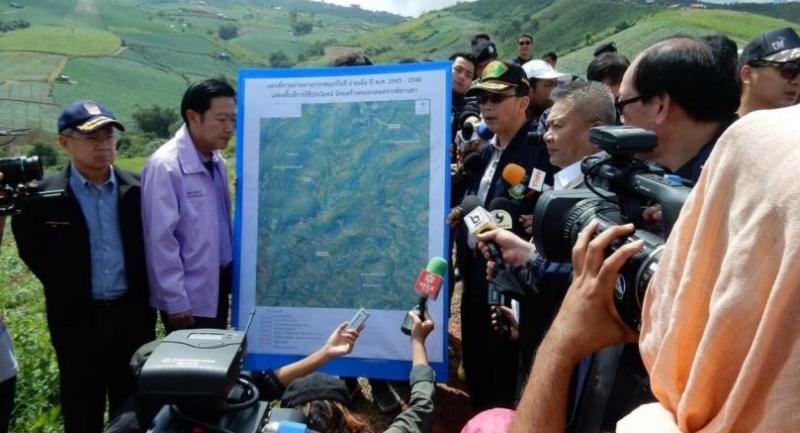 CHONLATID Suraswadi isn’t surprised when he encounters the same old tricks commonly used by big-time encroachers trying to grab forest lands that are under his charge. But now he has a new headache, as these deceitful figures are now using an unprecedented type of land-rental contract to cover up their illegal actions.

“With this new trick, their illegal actions could fall into a ‘grey’ area,” said Chonlatid, the Royal Forestry Department (RFD) chief, referring to a new legal complication that has emerged.

Having supervised forest crime suppression during the past two years, Chonlatid well understands the impact these big-time encroachers are having on a precious national resource.

The forest reserves under the RFD are among the country’s oldest. Nearly 148 million rai (23.7 million hectares) of land in around 1,221 forests were first designated under the 1964 Forest Reserve Act. Some of the land was allocated to the National Parks, Wildlife and Plant Conservation Department and the Agricultural Land Reform Office, leaving around 70 million rai still under the RFD’s care.

Of this, according to Chonlatid, nearly half, or around 30 million rai, has been degraded as a result of long-time encroachment, especially by poor people growing crops.

The department has also learnt that about 9 million rai of forest reserves on watersheds nationwide have been degraded. At least 6 million rai, and perhaps as many as 15 million rai, have people living on them, leaving a challenge to the department to rearrange land use and allocations through the coming Community Forest Bill.

The issue has grown more complicated with the arrival of big-time encroachers.

Since it took power in the 2014 coup, the junta had made land encroachment one of its national priorities. It came up with two orders, the National Council for Peace and Order No. 64/ 2557 and 66/ 2557 to directly target the big-time encroachers, generally influential, rich people.

The RFD was among the first state agencies assigned by the junta to enforce these orders to seize back forest land from these people, dubbed Nai Tun. The new special forest crime suppression taskforce, Phayak Prai, was set up as a result. It was led by the former chief of Phuket’s Sirinat National Park, Cheewapap Cheewatham.

According to the department’s deputy chief, Athapol Charoenshunsa, the grabbing of the country’s forest reserves by these people commonly starts with land purchases from the poor.

The more beautiful the locations, the higher the area of land changing hands and the more the transactions. Some plot prices are inflated by purchases, while others have been turned into resorts. Some 2,000 resorts are identified as encroaching upon the department’s forests.

Worse, some Nai Tun try to make this illegal forest encroachment act legal with the false issuance of land deeds gained via their influence and money. Recently, these plots of land are introduced to foreigners, who sign a rental arrangement, further complicating the situation.

"Once they had grabbed the forest land, these people would try every way, with or without land documents, to maintain their business on the land. Some of them would choose to lobby officials, or even “interfere with” the justice process," said Athapol.

And just recently, officials under his charge received a death threat, and there was an explosion near their operational tents on Phu Tab Berk mountain in Phetchabun province.

This reflects how serious this business of deceit has become.

On Phu Tab Berk, the forest area was once occupied by hilltribe people known locally as Hmong. A number of them were once so-called ex-communists and supporters who received allocated plots of land there in return for their support of the state’s development plans following a Cabinet resolution in the late 1960s. But in recent years, the department has found that the area has become a tourist attraction and that plots of land have changed hands to a number of resort owners and their nominees. At least 105 have been identified, leaving only a handful of legitimate land users on the land.

With strong resistance from these resort operators, the junta subsequently issued an order to deal with the Phu Tab Berk issue directly. The order number 35/2559 enables officials to enforce the law and remove properties to ensure public safety due to the fragile mountain.

A new approach to deal with legitimate land users is also being explored under the newly set up joint committee. Old land users there would be allowed to continue using their land under agreed terms set by the committee. The department expects that this would set a precedent to deal with highland and watershed encroachment in other areas.

Realising the influence and sophistication of the illegal operators, the government, through its national forest encroachment and exploitation prevention and suppression panel, set up the Forest Protecting Operation Centre (FPOC) in May. Its task is to help integrate the authority and expertise needed to keep up with these big-time encroachers, improving the limited law-enforcement front.

Under the centre’s umbrella, the department’s Phayak Prai taskforce will work alongside the National Parks Department’s Phaya Sua taskforce, and the Marine and Coastal Resources Department’s White Shark taskforce. Also involved will be other concerned agencies, including the Internal Security Operations Command (Isoc). Their authority will be integrated, as well as their multi-disciplinary skills.

New technology, including a forest detection application, has been developed for the public to download to help keep an eye on unusual uses of forest land and report back to officials.

Chonlatid views this development with hope.

“In the past, we worked alone. Wherever we went, people just didn’t want to talk to us,” said Chonlatid. “They hated us … but not any more.”

Since the issuance of the junta’s orders in 2014, the department has managed to make nearly 12,000 arrests, with more than 400,000 rai of encroached forests raided. However, the number of cases that have been finalised |through the courts is far lower, as seen by The Nation.

Despite improvements in law enforcement, Chonlatid concedes the limits of legal proceedings. He notes that forest officials are just at the beginning of the process, being merely able to arrest people and forward cases to the police.

The justice process, he said, usually takes time, and that’s a critical part of the reason why these people are not afraid and are prepared to take the risk of investing in the encroachment of prime and pristine forests. While their cases are being decided, they would have time to exploit the land for huge profits, Chonlatid said. Still, he sees the need to “stop the bleeding”, referring to continued massive encroachment.

Chonlatid said forest officials needed to be open to, and ready for, new work approaches, such as that introduced through the FPOC. In addition, serious integration of work from all concerned agencies is needed. There may be a need for a permanent authority.

Chonlatid said that concerned authorities have also spoken about legal amendments to keep up with big-time encroachers’ influence. The model at Phu Tab Berk is on the discussion agenda.

Finding a solution in the long run, Chonlatid said, lies with the people.

He said the right forestry management should have people and communities at its heart. People should understand that they can and must help the state protect and take care of the forests.

“The forests are not ours. [They don’t belong to] forest officials at the department any more. We need a new thinking that people can live with the forests – and we must.

“The best reform is … the revolution of minds, and how we can live with the forests is truly a big challenge to us all,” he said.

Chonlatid pointed to HM the late King’s self sufficiency philosophy as the way forward.

Put people at the heart of forest protection: reformer

A FOREST REFORMER said officials should get more serious about institutionalising their work integration through the new Forest Protecting Operation Centre (FPOC), as the centre is backed by the junta government which will soon leave office.

Assistant Professor Khwanchai Duangsathaporn, a member of the natural resources and environment reform committee said so far, efforts against encroachment had only met with the humble success of “stopping the bleeding”, which was far from the strategic goal of forest preservation.

He said big-time encroachers are more sophisticated than in the past. They use various tricks, including using nominees to hold the encroached forest land for them. They are influential people who are prepared to take risks to grab land because its value is increasing. The justice process, meanwhile, is long and too procedural. Moreover, the definition of “Nai Tun” that is used for big-time encroachers is unclear, prompting wrongful arrests that confuse the cases further.

The professor’s concern is that the system relies on the temporary absolute power of the junta. He also noted that the “stop the bleeding” policy had not yet helped meet the goal of increasing the forest areas to 40 per cent as set under the new national strategy.

Khwanchai said the authorities should think seriously about how to institutionalise the FPOC.

He said legal amendments on some forest-related laws were being amended to increase penalties, but this would not be enough.

To ensure a long-term success, people should be at the heart of the problem solving effort, he said. To get people to help officials in protecting the country’s forests is “critical” because their level of co-operation and participation is low at present.

Khwanchai proposes institutionalisation of the people’s participation in protecting the country’s forest, via law enactment, including a new community forest law.