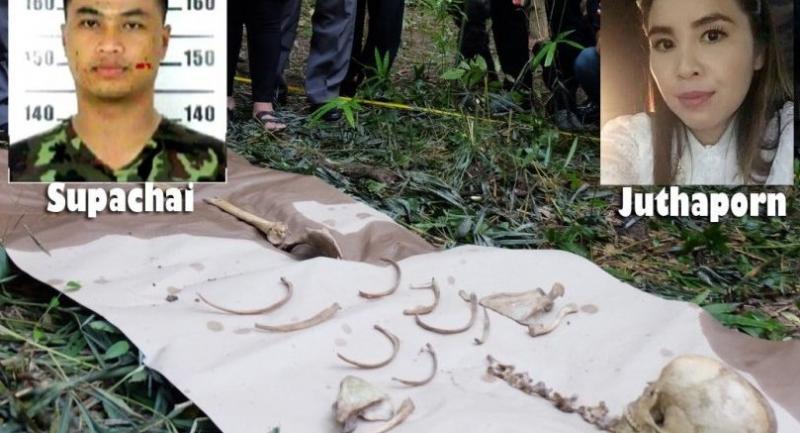 The Institute of Forensic Medicine at the Police General Hospital previously confirmed that a human skull, bones and other items found last week near the 2305th paramilitary ranger base in Ubon Ratchathani’s Nam Yeun district belonged to 37-year-old Juthaporn, who had been missing since July 3.

The new charges include premeditated murder, illegal detention leading to another person’s death, and concealing or destroying a body.

Si Sa Ket police chief Pol Maj-General Suradech Dentham said Supachai would be brought to the Kantharalak Provincial Court, which would decide on his bail.

Supachai, 30, who has been dismissed from the military, had already been charged with illegal detention, stealing Juthaporn’s car, using fake documents and destroying another person’s documents leading to damages.

Police have investigated possible motives for Juthaporn’s disappearance, including a dispute over a debt and her relationship with Supachai, who was linked to the case following police’s discovery on August 8 of her Toyota Vios, which had been sold three times in the interim, at an Ubon Ratchathani garage.

Meanwhile, police spokesman Pol Colonel Krissana Pattanacharoen told reporters in Bangkok that police would ask the court not to grant bail to Supachai because he had been charged with three additional serious charges that could potentially carry the death sentence.

He added that police had gathered evidence and proceeded with the case investigation transparently to ensure justice for all sides.