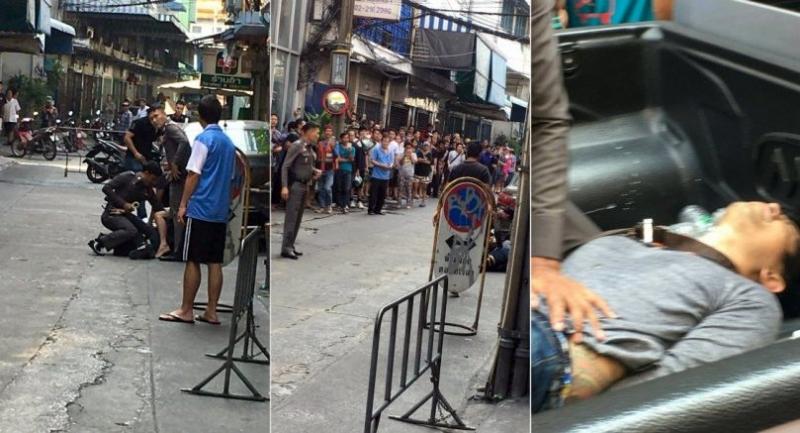 Ekkalak “Ek Namtao” Prada-in, who allegedly held three woman in a Bangkok salon hostage at a gunpoint on Sunday while under the influence of drugs and then was shot three times by police, has a long criminal record, said Pathumwan superintendant Pol Colonel Popthorn Jitman on Monday.

Police on Monday applied to the courts for an arrest warrant for Ekkalak on seven charges, including attempted murder of a police officer, resisting arrest, illegal detention of other people and causing property damage. The other three violations pertained to the Firearm Act regarding possession of a gun and ammunition without permission, carrying a gun in public and firing a gun in public.

The 31-year-old Ekkalak, who was being treated at the Police General Hospital for critical wounds, had been sentenced to 25 years and nine months in prison over a murder in Phayathai district in 2004. After being released, he was arrested in Bang Rak district on drug charges and jailed for 20 months before being released six months ago, Popthorn said.

On Sunday, Ekkalak barged into a salon in Soi Wat Boronniwat on Rama I Road in Pathumwan district, allegedly holding salon owner Suphud Lotthong, 38, and two female customers hostage at gunpoint. After a 15-minute standoff with police, he agreed to release Suphud and one customer.

Keeping one hostage inside the salon, Ekkalak, who reportedly appeared intoxicated, at one point stepped to the front of the shop and shouted that he had been “betrayed” and that he wanted police who were chasing him to kill him.

He spotted police officers in an electrical appliance shop opposite the salon and allegedly fired one shot, resulting in police returning fire and injuring him in the leg.

According to officers, Ekkalak then turned the gun against his head and pulled the trigger but it jammed, so he ran out of the salon and fired his gun twice more in an attempt to escape. Police then shot him twice in the stomach and apprehended him.

In addition to the kidnapping and firearms charges, police were investigating Ekkalak’s possible connections to drug crimes to apprehend any accomplices involved, Popthorn said.