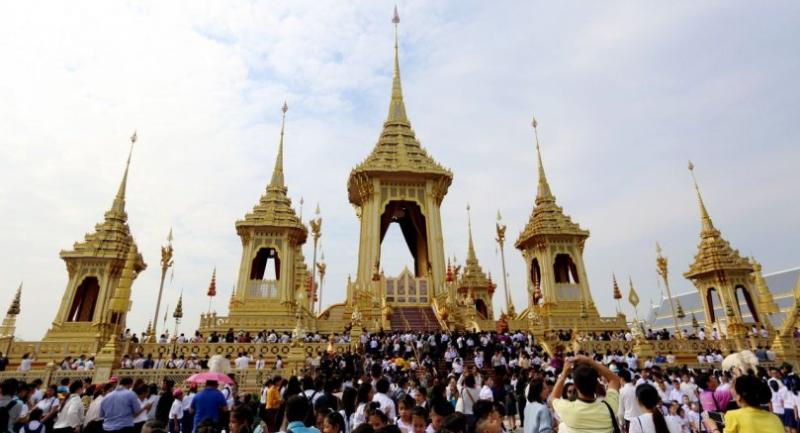 As many as 100,000 people are expected to visit the exhibition each day. The eight roads adjacent to Sanam Luang will remain closed. About 5,500 visitors at a time were led through three areas, first seeing exhibits related to Royal Projects initiated by His Majesty the late King Bhumibol Adulyadej.

These include a demonstration rice field, “monkey cheek” water-retention ponds and the Chaipattana water-aeration device he invented. Other exhibits illustrate aspects of the royal funeral itself. Visitors, who must be respectfully attired, will then have a chance to take photos with a polite manner with the Royal Cremation as the backdrop. Selfies and live online broadcasts are not allowed.

The highlight of the tour is viewing the ornately decorated interior of the crematorium, which has not been accessible to the general public until now.

Tanasak, who was accompanied on Wednesday by Culture Minister Vira Rojpojanarat, said the government understood that people were keen to view the inside.

He urged visitors to keep moving, though, to give others their chance.

The tour ends in the Songtham Pavilion, with its three wondrous murals depicting the royal projects and an exhibition of the late monarch at different stages of his 70-year reign.

The tour includes recorded audio commentary for the hearing-impaired and touchable exhibits for the visually impaired, including a replica of the crematorium. More than three million people are expected to visit through November, after which, Tanasak said, demand would be assessed to determine whether the period should be extended.

If demand remains high, he said, the government would seek His Majesty the King’s permission to extend the timeframe.