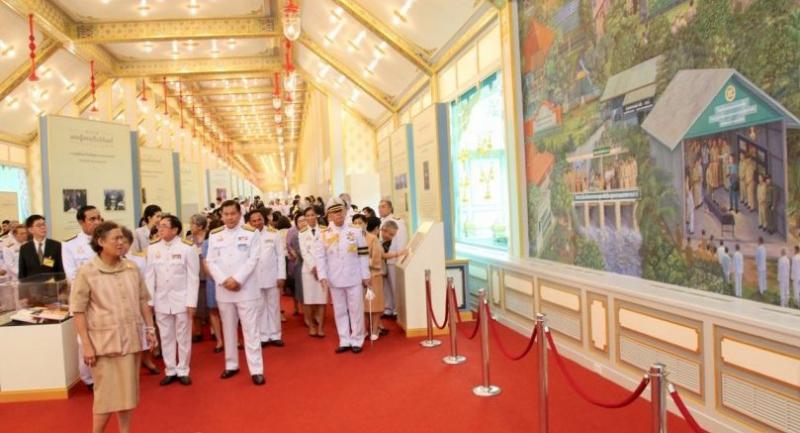 THE CULTURE Ministry announced |yesterday morning a ban on entering the Royal Crematorium of the late King Bhumibol Adulyadej after visitors reportedly touched exhibits and displayed other inappropriate behaviour during a trial run on Wednesday spread on social media. But photos posted on social media showed visitors with their heads leaning together and posing with the Crematorium in the background. Additionally, people were seen touching the sculptures decorating the masterpiece, while others took items from the exhibition.

“In order to run the tour smoothly with appropriate manners, the ministry announced that from November 2 [yesterday] onward, the general public can visit only the surroundings of the Royal Crematorium,” Anan Choochote, director-general of the Fine Arts Department, told Kom Chad Luek.

He added that the committee was also concerned for the safety of visitors. “The government will take action immediately on HRH Princess Sirindhorn’s advice to solve problems related to visitors crowding the area at the Royal Crematorium Exhibition, where items could be broken before the exhibition closes at the end of this month. However, there is no discussion on the extension of timetable,” Wissanu said.

Officials were seen yesterday equipping sensors on some items, which were said to be a preventive measure to detect if people came in too close a proximity.

Wassachon Thiangtae, a second-year student at Rajamangala University of Technology Rattanakosin Poh Chang, said that it was a pity that people cannot enter the second floor of thcrematorium after the prohibition was issued. “Because of them [people displaying inappropriate behaviour], people today missed an opportunity to get closer and to have an experience to visit the Royal Crematorium.

“Those people are selfish and did not think about others,” said Wassachon.

She added that she and her friends would return to the site since one hour was not enough.

“We waited at the screening point only a short time. Officials there have very good management,” Wassachon said. Sanchai Premsiri, 53, from Bangkok, said at first he planned to just look around, but after an official told him the queue was not long, he waited only 20 minutes to take the tour.

He agreed with the prohibition preventing people from entering the second floor, saying items could be damaged if 100,000 of people went there each day for one month.

“This place is not a tourist attraction, it is a sacred site,” Sanchai said. He said he wanted the Royal Crematorium to be kept intact for the next generation.

A Cultural Ministry official said the tours were running smoothly, with people dressing properly, behaving well and following the rules.

As many as 100,000 people are expected to visit the exhibition daily, with the eight roads adjacent to Sanam Luang remaining closed. In total, more than 3 million visitors are projected to visit the Royal Crematorium exhibition, which is open to the public until the end of November from 7am until 10pm.