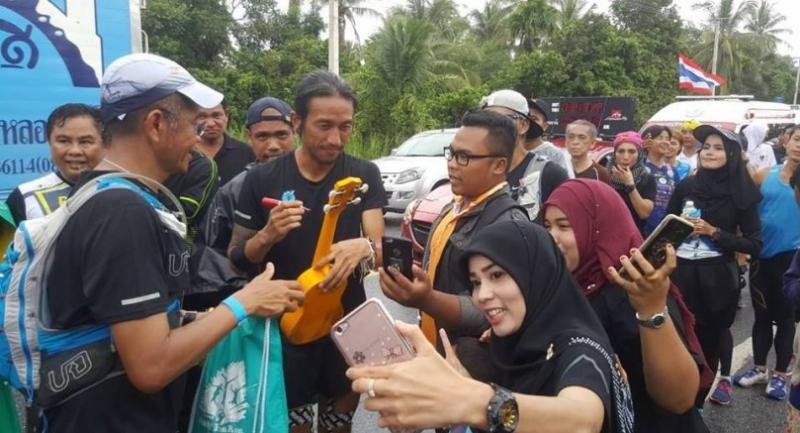 Rock star Artiwara “Toon” Kongmalai reached Bt73-million in donations by the end of Saturday, the fourth day of his epic 2,191-kilometre fundraising run.

His aim was to raise Bt700 million for 11 public hospitals under the banner “Kao Kon La Kao”, (“Take One Step Each”) from his starting point in Yala’s Betong district on Wednesday morning.

Artiwara ended Saturday’s run in Pattani after a 5.20am start from Yala’s Muang district. He had planned a five-hour run to reach Wat Thanapimuk in Pattani, but suffered a foot injury in the heavy rain. The 38-year-old singer eventually made Pattani at 2pm, where local officers welcomed him and a cheering crowd gave him a garland of money, took selfies and showed him moral support.

He was protected by military, police and security officers, who allowed fans to touch the tired rock star.

Due to his injury, after crossing his day’s finishing line, Artiwara rode a car to Ban Yang Daeng school in Pattani’s Khok Pho district, where he donated sport equipment and scholarships to students.