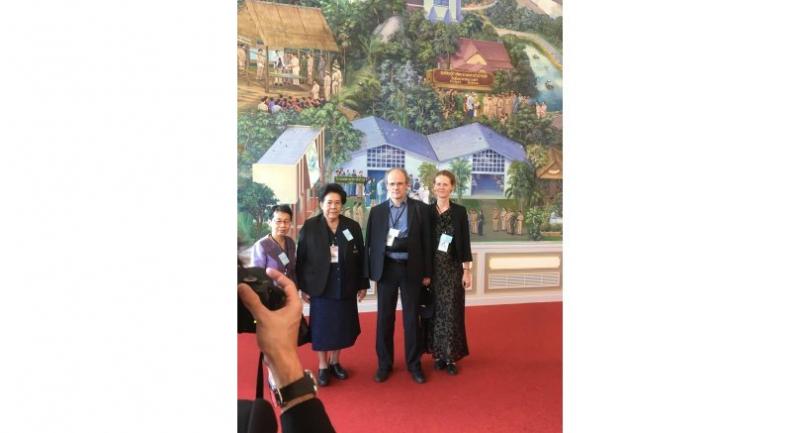 The Royal Crematorium of HM the late King Bhumibol Adulyadej has been open to the pubฌlic since Thursday with people flocking to have a firsthand experience to see the splendid Merumas and other items built by masters of arts across the country for the much-beloved late King.

Among the visitors have been foreigners who braved the crowds to queue to visit the cremaฌtorium and surrounding pavilions.

One of them was Jacques Moreau, an adviser to the Princess Galyani Vadhana Institute of Music, who said the ceremonies for the late HM King were the first time that he had had a chance to see a Royal funeral.

It had made a great impression on him perฌsonally, he said.

Moreau had seen video footage of the Royal funeral for HRH Princess Galyani Vadhana that was held in November 15, 2008 after she passed away in January the same year.

Because of that, Moreau said he knew what was going on, “but this Royal Funeral for King Rama IX is tremendously unique. There is no need to compare it to the Princess’s funeral.”

“What impressed me a lot was all the people everywhere and the devotion of the Thai peoฌple to their beloved monarch. It is something unique in the world,” he said.

Moreau said he had learned about the King’s devotion to his people and his good work. “This ceremony showed what he did for his people. Now I have discovered the really deep devotion the Thai people have for the King. There are no more questions of politics, of if you are with the monarchy or not.”

He said that he was at Sanam Luang when the Royal Cremation was held on October 26.

“I watched the cremation from outside. When the cremation started, there was a huge silence. Nobody moved. It was very deep emotional experience.”

Talking about the Royal Cremation buildings, he said it was clear that everybody had done their best work in the most perfect homage they could give to their beloved King.

Moreau said that when one laid the flowers for the late King, it was not the flower that matฌtered, it was that you had done it as an expresฌsion of last respect.

“It is not only the matter of having beautiful [crematorium] buildings for the King. Each one would give what he knows best to do for that event,” he said.

Apparently referring to criticism by some western media that the Royal funeral was too expensive,  Moreau said western people might think the cost was too high and it should be spent somewhere else.

“But when you witness it, you understand that it is not a question of money as it is a quesฌtion of respect, and a question of saying goodฌbye to 70 years of reign of a King who is with his people and of his people,” he said.

He described the experience of watching the funeral as “a very unusual experience for the 21 century”.

Also visiting the Royal Crematorium was Allan Macister from Australia, who is frequent visitor to Thailand, having visited the Kingdom about 20 times. He said he had waited in the line about two hours before being able to enter the premises. “I chose to visit Thailand during the late King’s Royal Funeral to be part of history. I was here during Princess Galyani’s cremation in 2008, and I came here this time especially for the Royal Funeral of King Rama IX.”

Macister said the late King had done a lot for his country. “It is amazing how the crematorium buildings were built,” he added.

He said it was a shame that they would be removed, but he was glad that many items would be placed in museums for people to see.

He also said he would return to the ceremonial grounds again, as a one-hour visit was not enough for him to see all of the pavilions.

Minke Dokter, from Holland, who visited the grounds with her husband, said that she had not had long to wait at the screening point before coming in. She also praised officials for handling the crowds, saying the venue was very well organised.

Dokter, who has lived near Pattaya for many years, said she had read about and watched the Royal Funeral coverage on BBC news and come to Bangkok to see the crematorium with her own eyes.

“I know that the late King did a lot for the Thai people. The crematorium and buildings are nicely done and I think it is very impressive,” she said.